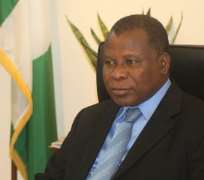 ... EFCC Gets Directive To Investigate Closures And Money Laundering Allegations

SAN FRANCISCO, June 24, (THEWILL) – President Goodluck Ebele Jonathan has directed the Econonic and Financial Crimes Commission (EFCC) to investigate reports of money laundering and the closure of bank accounts operated by the Nigerian Embassy in the United States of America.

The President made the revelation during a media chat with journalists on Sunday inside the Presidential villa.

Some reports particularly in the online media had accused the Nigerian Ambassador to the USA, Professor Adebowale Adefuye of making several large cash withdrawals from the Embassy accounts at M&T Bank, prompting the management of the bank to close all accounts operated by the mission in New York, Washington DC and Atlanta, on suspicion of money laundering.

The embassy has however described the reports as malicious and untrue saying; the accounts were closed by the bank because of the stringent requirements prescribed for the operation of embassy accounts by the US Patriot ACT, due to threats of terrorism especially within African states like Somalia.

The EFCC according to the President will investigate and unravel the facts surrounding the closures.