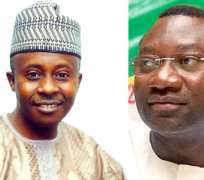 Any country that takes seriously the realization of its potential sets out to enthrone civilized conduct, specifically the culture of law and order. The principle of accountability is an essential part of this ethos. Such a country works towards the ideal of a crime-free. It means that the machinery of state power attempts to make crime harder to commit, easier to detect, and more reliably punished.

Nigeria, on the other hand, is avowedly a free-crime zone. It means that the Nigerian state encourages the planning and commission of grand crimes by its most connected elements. The Nigerian space has been nurtured into a fertilizer for crime. The tools of the Nigerian state are designed to shield the worst criminals – those who (through acts of embezzlement, money laundering and sundry corruption) betray the public trust – from prosecution.

In fact, the going precept and practice of the Nigerian state is to reward the most versed, versatile and unconscionable practitioners of the crime arts. The grander the crime committed in Nigeria, the higher the reward. When one speaks of the doctrine of law and order in Nigeria, one refers to the punishment of inconsequential criminals, rookies who choose to play in the small-time leagues of armed robbery and pick-pocketing. Even big time armed robbers in Nigeria often count on a steady supply of guns and intelligence from the police.

Nigeria’s transformation into a free-crime zone and ideology is being displayed before our very eyes – and those of the world – in the corruption saga featuring businessman Femi Otedola and legislator Farouk Lawan. Several weeks ago, Nigerians received the report of a legislative investigation into the massive fraud in fuel subsidies. Mr. Lawan headed a committee of the House of Representatives that carried out that probe.

The details of the fraud as disclosed by the Lawan committee were lurid, but hardly shocking. The committee revealed what informed Nigerians already knew. The report confirmed public suspicion that the bloated expenditure on fuel subsidy was the latest scam in town. It underscored how fuel marketers, a small cartel chosen by the country’s political machinery, raked in billions of dollars in illicit, fraudulent profits. The committee exposed the many schemes used by fuel importers as well as rogue public officials to steal Nigerians to stupor in the name of fuel subsidies.

Last week, it turned out that Mr. Lawan was playing on – and profiting from – both sides of the issue. Nigerians mistook him for a principled, patriotic lawmaker. They gushed in praise of him, and he basked in the celebration. Yet, at night, he apparently sneaked into the home of Mr. Otedola – one of the biggest players in the fuel market – and asked for as well as pocketed lucre. At the last count, Mr. Otedola had handed out $620,000 to the would-be legislative foe of fuel subsidy corruption.

The revelations of Mr. Lawan’s traitorous double-dealing sucked the wind out of Nigerians. Here we were thinking that a member of the misruling cabal had chosen to expose iniquitous conduct by his fellows, committing a form of class suicide. But no! The ostensible knight was, it seems, out for his own slice of the dwindling (national) cake. Far from being a man of the people, he was a man committed to the dictates of his insatiable gut. Like the rest of the contemptible lot!

If it was a dispiriting week for most Nigerians, one can hazard that it was a terrific week for President Goodluck Jonathan and his coterie of steakholders. Thanks to the Lawan bribe mess, Mr. Jonathan now has a perfect, carefully designed reason to throw the Lawan committee’s sordid revelations of mindless fraud in fuel subsidy disbursements into the trash bin.

Nigeria will remain what those who preside over its wrecking want it to be: a space where big crimes are committed daily, but no big criminals are ever netted. The hideous unmasking of Lawan fits a clear, tactical pattern. In the Umaru Yar’Adua days, Ndudi Elumelu chaired an investigative committee on power expenditures made by former President Olusegun Obasanjo. There were startling revelations of hundreds of millions of dollars paid for power projects that were never executed, and often to companies that didn’t even exist as legal corporate entities. Alas, the only thing that was ever done with that probe is that Mr. Elumelu was taken to court, reportedly for seeking to profit from electrification projects. More recently, a legislative hearing into the collapse of the stock market was drowned out by charges that Herman Hembe, the chairman of the committee, had asked Arunma Oteh, who oversaw the securities market, for a handsome bribe.

It’s called muddying the water, a strategy designed to confound Nigerians, an abracadabra whose import is to confuse the rest of us and ensure that those who fleece Nigeria get away with it – their loot intact.

That’s why it must be understood that the Otedola-Lawan face-off is a false feud. Lawan lost his mind for a second, but he will be rehabilitated. You can bank this: both men will end up playing on the same team. Their fellow team players – the parasites sucking Nigeria to a hastened death – will see to it that this unfortunate misunderstanding is resolved. When all’s said and done, the two men will continue to enjoy access to the cake (or eba) that is withheld from ninety percent of Nigerians. Neither man will be put through any serious trial, much less suffer the indignity of jail time. In the end, both “combatants” are more likely to appear on a roster of candidates for national honors, or seen whispering into the ear of the president at some public function.


This outcome is a certainty because Nigeria has long been organized and operated as a fraud par excellence. Nigeria is a strange laboratory, one where those called chieftains are, as a rule, thieftains; where so-called stakeholders are experts in veritable, state-sponsored racketeering; where many (perhaps most) of the recipients of ostensible “national honors” are horrific criminals whose place – if Nigeria were remotely a decent society – would be in jail. Put quite simply, Nigeria is fraud incorporated.

And those whose job is to run (that is, ruin) Nigeria do their damndest to ensure that no critic inconveniences or subverts the country’s main industry: corruption in all its myriad forms.

The unfettered growth of corruption is an idea that (in Nigeria) must be preserved, a task that must be done. Any critic whose noise disturbs the peace of Nigeria’s debauched gourmands (steakholders) will be handed some silence-inducing crumbs from the table. If he or she resists, then the state reserves the right to employ whips to drive the rude, importunate rabble rouser from the perimeters of the depraved feast.

If the Nigerian state doesn’t suffer critics gladly, it’s particularly unforgiving of those among the privileged who get it into their heads to play traitors from within the halls of sleaze. Once you’ve been anointed as one of the exalted ones, once you’ve been selected and invited into the sanctum sanctorum of feasters in Nigeria, you better learn the fine art of overeating and over-drinking with equanimity. You’re not to talk with your mouth loaded.

And if you must talk, it should be to mouth some approved, hackneyed phrases for the benefit of the non-eating, non-drinking, often grumbling masses. Yes, you may tell these masses that you and your fellow grubbers have “more than delivered the dividends of democracy.” Or: “We have totally redefined the art of governance.” Or: “We’re moving the nation (or state, or local government area) forward.” Or: “Do not overheat the polity.” Or: “Remember that only God gives power (not some foolish voters).” Or: “To God be all the glory.” Or: “It shall be well with Nigeria.” Or: “Nigeria is in God’s hands.” Or: “Pray hard and fast long that God may take heed and solve all your problems.”

Yes, whilst stuffing yourself at the oil-soaked altar, it’s crucial to remind Nigerians that their deficient, feeble prayers are the cause of the multitude of problems in their country. If only they would fast, not just for forty days and forty nights, but for 365 days non-stop, all their nation’s crises would vanish. If only they would pore through the Bible or Koran for all twenty-four hours of the day, their woes would disappear. All bad roads would be divinely repaired. More jobs (of pastors and imams) would be created, rendering unemployment a thing of the past. All cancers and healthcare maladies would be miraculously cured. All kidnappers and suicide bombers would be divinely arrested. The sun shall shine on Nigeria all-day and all-night long, solving the intractable problem of epileptic power supply. If we prayed harder and fasted more assiduously, divine peace shall descend on Nigeria and reign everlasting, untouched by any schemes and machinations of the Devil.

The criminals who run Nigeria take exception to any breaches in their ranks. They take a harsh view of any of their number who forgets him or herself, however momentarily, and begins to rock the boat. That’s why Mr. Lawan will be made to feel some heat for some time, and then, properly chastened, he will be reincorporated into the family.

Mark my words: nobody, not Otedola, not Lawan, will lose any sleep over the current brouhaha. They will continue to thrive, even if it means that Nigeria’s strife deepens. Mark these other words: as long as Nigeria is run by criminals for the sole benefit of fellow criminals, the day is nigh when the edifice will come crashing.