OSU-IGBO MARRIAGE HAD BASIS IN TABU AGAINST CORRUPTION 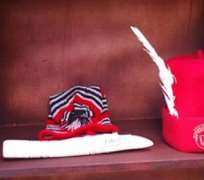 Marriage is the only social pressure left, short of criminal conviction to forbid atrocities in most communities. The Igbo are no different from the British that sent rejected criminals to the evil forest across the ocean to the unknown America. The difference is while the Americans and the Osu have rehabilitated and prospered, a few communities in Ndi-Igbo still practiced a custom that is irrelevant and unproductive. Before you jump on the Igbo, look at the Americans today!

Since marriage is the beginning of family life and procreation of the next generation, avoiding abomination and corruption of the culture send the message of zero tolerance in our societies. It was supposed to instill good behavior and orderly conduct. If you knew that you would be banished or excommunicated with your next generations when found wanting in character, there was no greater incentive than to be of exceptional moral personality.

The fact that Osu fell from grace may not justify their treatment today, which has almost died down anyway. But it shows how powerful marriage was in checking corruption of the past. It did not stop at the foot of the transgressors; it extended to the family and kin. The sins of the father by abomination following the children must be prevented from infecting people from good homes. This by itself may not be fair, especially in cases of the innocent children.

The Igbo culture shares with the rest of the world marriage ceremony to check abnormalities. The form of discrimination itself was instituted to punish corruption of power by the Osu that abused their exalted position in the community. Osu fell from grace to abomination and were banished. Many uninformed people used the iniquitousness to condemn the whole Idi-Igbo. In today’s culture of corruption in Nigeria’s politics where only money counts; Osu is misplaced.

Most cultures share marrying into a good home in common. Families undertake very extensive background checks of one another even when they are from the same community. Some royal cultures of Europe go to the other extreme and marry their relatives or cousins mainly to keep privileges and advantages at home. It is their way of avoiding surprises and the embarrassment of marrying unknown commoners that may be embedded in corruption or abomination.

In most cultures like the Igbo, you do not marry into a gangster family that has soiled its name by running afoul of community’s etiquette. The way it used to be and still is in many cultures, you must conduct background checks into the family of the man or woman you want to marry to make sure there is no blemish in their past. Divorce was not as common. Investigators make extensive search, a standard none of the present political moneybags in Nigeria can meet.

The Osu accepted western education and religion before their neighbors, to break out. Some of the most beautiful women in Nigeria and some of the richest men are Osu that can marry into many families based on their good moral characters over the years. The culture of marriage played its important role then by decreasing the atrocities in the various communities. The same culture of marriage is badly needed in the culture of looter-maniac today.

While young men and women marry money no matter its source these days, the older ones remember when the question was posed: which house do you come from? If the golden rule of marriage of those days is still applied today, the stigma attached to corruption would be worse than those attached to Osu in the past years. It would deter reasonable men and women from being associated with politicians, most of whom have been rewarded as perpetual eyesore.

However, these political elites are the ruling class and like the ruling class of Europe marry one another. They have turned the purifying culture of marriage into infected culture of bacteria. They marry one another at their hill top mansions avoiding stone throwers. Their ceremonies are heavily guarded. One of these days, the sins of the Osu will catch up with them and their own sons concealing whatever, in their diapers will blow them up.

Outside Igbo land, young men and ladies boast of getting married to Osu and take them back home. One has to understand how hard work and loyalty is so entrenched in Igbo culture that they become valuable to their neighbors in Africa and beyond. The exploration into other parts of Nigeria and their acceptance did not come by self-interest alone. Failure for a young man is not an option in Igbo culture, so if they do not succeed at home, they must succeed outside.

Initially, Hausa or Yoruba would be more than willing to trust his business with an Igbo knowing their reputation for hard work and fierce loyalty than his fellow Yoruba or Hausa. But today, expediency and politics has taken over cultural purification of marriage. Though Igbo, Yoruba and Hausa do not trust one another anymore, may be if we go back to our cultures and revisit the reason we work so well together in the past, we may be able to rebuild our future.

The contribution of Idi-Igbo as a people is widely acknowledged, though a few noise makers beat their chests. The place for Osu treatment especially in marriage is cleansing our political system by denying vagabonds wife and husband. Marriage remains a very important ceremony that should be leveraged as purifying force instead of allowing vultures to take it over. In those days, if you see all members of a family married to foreigners, you started wondering.

One would expect that the Igbo culture that knows no kings would also know no Osu as an egalitarian society. Indeed, the Osu discrimination today is an aberration of Idi-Igbo culture where age may be respected but hard work is highly revered. Marriage in the Igbo culture, like other cultures, is a selective and purifying ceremony to weed out corruption from deviant characters. Osu was bad, but a far cry from history of gory French guillotine or Russian gulag.

Indeed, the next generation of President Mubarak of Egypt might be treated worse than Osu. Joseph was a powerful figure in ancient Egypt that saved the population from famine. Nobody would have guessed that the children of Joseph would be so badly treated in Egypt. Moses that led them out of Egypt was also raised in the house of Pharaoh. Time, education and enlightened population have overtaken the past sins of Osu and the injustices that follow their generations.

Do not be surprised if foreign researchers come to study marriage in Nigeria and leave with the impression that the culture of family introduction and investigation have been thrown away into the evil forest. What researchers will be left with is the impression of marriage where only money and status in a political party count. That is how Osu became a caste as punishment for past atrocities.