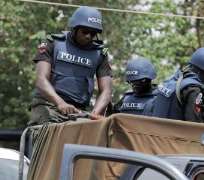 Markson Macaulay, who had just returned to Delta after the completion of his post graduate studies abroad was abducted just about 12 mid day in front of the family’s country home and forced into a VW Jetta sedan. Eyewitnesses say he was trailed by his abductors.

The gunmen have not contacted the family as at press time.

State Police Spokesman, Mr. Charles Muka, told THEWILL that those arrested have started helping the police with investigations into the crime.

This is the 3rd prominent abduction incident to hit Delta State in the last 4 weeks. Christian Obodo, a former Super Eagles soccer star was kidnapped in Warri, but regained his freedom a few days later.

Last week, a first cousin to the Delta State Governor, Dr. Emmanuel Uduaghan was abducted outside his residence in Asaba but regained his freedom on Saturday night. THEWILL could not confirm whether a ransom was paid to secure his release.

A few days ago, the Delta State Governor and the House of Assembly expressed dismay over the release and redeployment back to the State of the indicted head of the Delta Anti-Kidnapping Task Force, CSP Dickson Adeyemi Osamwonyi, who alongside six members of the squad were last April disarmed, arrested and flown to Abuja on the orders of the Acting Inspector General of Police, Mr. Mohammed Abubakar, for allegedly aiding and abetting kidnappers in the state.