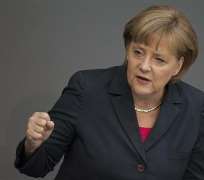 Spain and Italy, under increasing fire in Europe's debt crisis, promised new measures to repair their public finances as their soaring borrowing costs raised new alarm ahead of a cliffhanger Greek election.

But German Chancellor Angela Merkel rebuffed pressure from EU partners and the United States for Europe's most powerful economy to underwrite debt or guarantee bank deposits in the single currency area.

Spain's 10-year bond yield hit a euro lifetime high above 7 percent on Thursday - a danger level above which Greece, Ireland and Portugal were driven to seek international rescues - despite last weekend's euro zone agreement to lend Madrid up to 100 billion euros ($125 billion) to recapitalize ailing banks.

"It is not a situation that can be maintained over time... and I am convinced that we will continue to take more measures in the coming days and weeks to help bring it down," Spanish Economy Minister Luis de Guindos told reporters in the corridors of parliament.

The downgrade added to a sense of emergency in financial markets ahead of an election in debt-plagued Greece on Sunday that could deliver a mandate to an anti-bailout party.

Such proposals were "counterproductive" and would violate the German constitution, she said.

Instead, she called for gradual steps towards the "Herculean task" of building a European political union.

"It is our task today to make up for what was not done (when the euro was created in 1999) and to end the vicious circle of ever new debt, of not sticking to the rules," Merkel said.

She warned against overstraining the resources of Europe's biggest economy, saying: "Germany is putting this strength and this power to use for the wellbeing of people, not just in Germany but also to help European unity and the global economy. But we also know Germany's strength is not infinite."

Italy, rapidly coming into the firing line, saw its three-year borrowing costs shoot up to 5.3 percent at auction on Thursday, the highest since December, despite Germany's strong expression of support for Monti's reforms when he visited Berlin on Wednesday.

Surging Spanish and Italian bond yields reflect investors' concern that the 17-nation currency bloc has failed to arrest its 2-1/2-year-old debt crisis and faces potential turmoil after a general election that could put Greece on an unprecedented exit route from the euro area.

GREEKS WARNED
Hollande said in an interview with Greek television that he wanted Athens to stay in the single currency and it was up to Greek voters to decide what they wished.

"But I have to warn them, because I am a friend of Greece, that if the impression is given that Greece wants to distance itself from its commitments and abandon all prospect of recovery, there will be countries in the euro zone which will prefer to finish with the presence of Greece in the euro zone."

He did not name the countries but German, Dutch and Austrian officials have spoken openly of a possible Greek exit.

In the last opinion polls published before a blackout 10 days ago, the leftist SYRIZA party, which rejects the terms of Greece's EU/IMF bailout, was running neck-and-neck with the conservative New Democracy party, raising the possibility of a radical anti-austerity coalition or another deadlock.

However, battered Greek bank stocks rallied by 20 percent on market talk of secret opinion polls showing a government favorable to the bailout agreement was likely to emerge from the election.

"The market sees that a pro-European government which will push ahead with reforms will be formed on Sunday," said Panagiotis Kladis, an analyst at NBG Securities.

Greeks, who have endured four years of recession and now have 22.6 percent unemployment, have been pulling money out of the banks and stocking up on food ahead of the election, fearing worse turmoil after the vote.

Greece's debt woes have helped push neighboring Cyprus to the brink of seeing a financial rescue, with officials looking to Europe, Russia and China for the best possible bailout terms.

After weeks of wrangling Germany's centre-right governing parties and the centre-left opposition agreed on Thursday on a deal for parliament to ratify a treaty creating a permanent euro zone rescue fund in the last week in June, a coalition source said.

German Social Democratic opposition leaders, whose votes Merkel needed for the required two-thirds majority, had held off until after they met Hollande in Paris on Wednesday, emerging to say they agreed broadly on the need for measures to revive growth in Europe and tax financial transactions.

SPD chairman Sigmar Gabriel said Hollande understood that euro zone bonds could only come about after much deeper European economic and fiscal union had been created.

"We, however, at this point deem the introduction of a debt redemption (fund)... as the appropriate instrument and our French partners showed a lot of interest in this model," he told reporters in Paris.

The German government's council of economic advisers has proposed a scheme for euro zone members' debts above 60 percent of GDP to be pooled and paid down over 20 years by issuing joint bonds. Merkel has rejected that idea too.

U.S. PRESSES
Merkel acknowledged that the euro zone crisis, and Germany's role, would be at the centre of attention at next week's summit of the G20 major world economies in Los Cabos, Mexico.

The leaders gather on Monday, a day after the Greek election.

U.S. President Barack Obama, whose re-election prospects in November could be dented by the euro crisis, telephoned European Council President Herman Van Rompuy on Wednesday to inquire how Europe planned to cope with the outcome of the Greek vote.

"There is a lot of concern in America about the outcome of the Greek elections and how Europe will deal with the results," a European official familiar with the talks told Reuters.

U.S. Treasury Secretary Timothy Geithner said the world would be looking to Germany and other EU countries to provide clarity on plans for a euro zone banking union, a financial firewall and how Europe can revive economic growth.

But he said it would be unfair to see Germany as the sole source of the problem in the euro zone.

"Germany is saying make monetary union work. We are prepared to be behind this broader endeavor, you need to be in support of reforms," Geithner told the Council on Foreign Relations in Washington, adding that other countries needed to move toward Germany's position.