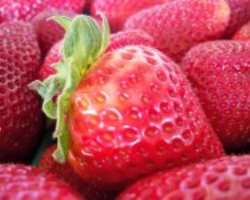 Diets rich in strawberries, other berries, nuts, and certain spices may lower age-related cognitive declines and the risk of neurodegenerative disease, according to James Joseph, Ph.D., of the USDA Human Nutrition Research Center on Aging at Tufts University in Boston. Dr. Joseph describes his breakthrough work on the everyday foods that promote brain health during a presentation this week at Neuroscience 2009, the 39th annual meeting of the Society for Neuroscience being held in Chicago.

Aging often results in mental decline -- and the world's aging population is large and growing. There are currently 390 million people over the age of 65 around the world with an expected increase to 800 million by 2025. According to Alzheimer's Disease International, dementia affects one in 20 people over the age of 65. Some 24 million people worldwide are currently thought to experience some form of dementia.

"With the rising cost of healthcare and drugs, patients are increasingly turning to preventive lifestyle actions over which they have some control, such as exercise and diet," said Dr. Joseph. "Emerging science continues to point to natural foods as sources of beneficial nutrients that can have some positive impact on cognitive function."

Strawberries, other berries, nuts, and certain spices contain plant compounds called polyphenols and other plant chemicals, which are believed to provide brain health benefits. Although some of the benefit has been attributed to the antioxidant activity of those compounds, antioxidant activity alone is not predictive in assessing the potency of these compounds against certain disorders affected by aging.

In fact, in Dr. Joseph's studies, oxidative stress markers were only modestly reduced by these antioxidant rich foods. The polyphenols in berry fruit like strawberries may be responsible for other mechanisms including enhanced neuronal communication and reduced stress signals due to enhanced neuroprotective stress shock proteins.

According to Dr. Joseph, you can protect yourself against the two major villains of aging, oxidation and inflammation, by including the following foods in your diet regularly:

* Strawberries
* Blueberries, raspberries, blackberries
* Walnuts
* Fish
* Turmeric (a spice in curry)
California strawberries are grown and available year-round in supermarkets across the country. As America's favorite fruit, they are an easy addition to a diet that promotes brain health.