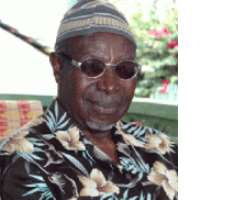 When he was 12 years old, he was in charge of tidying up his father's bedroom every morning, but one day he noticed that the bottle containing his father's 'bitters' (a locally brewed liquour) was not at its regular place - behind his father's wardrobe.

What most children would have done in such a situation was to ask their father about it or inform him about the sudden disappearance of the bottle. But this boy would not do that. he chose to investigate the whereabouts of the bottle among members of the household, who to him, constituted his principal 'suspects'.

Using his intuition, he cleared his two aunties from his investigations, because they were staunch Christians, and so an alcoholic beverage would not be of any use to them. His father was also cleared, because, to him, he could not steal his own drink.

The lot then fell on his uncle, who normally drank the bitters together with his father. And indeed, his hunch was rightly so as he eventually found the drink in his uncle's room. He picked it up and sent it to his father. Later, when his uncle got to know what had happened, he commended him and said, 'Look here Kofi, we don't want any bogus detective in this family.'

Forty years down the line, this young 'detective' became the Commissioner of Police in charge of the Criminal Investigations Department (CID) of the Ghana Police Service. This little but interesting investigative work was how Mr Kofi Bentum Quantson, our personality for this week, got interested in detective work.

'When I got the position of Commissioner of Police in charge of CID, I told myself I have to be a good detective and not a bogus one to honour my uncle.' Mr Quantson did not only become a detective, but he also distinguished himself in the field of investigations.

That is why perhaps, he headed almost all the top secret services in this country. He is a former Director, Bureau of National Investigations (BNI), National Security Co-ordinator (1997-2001), and Executive Secretary of the Narcotics Control Board, among others.

Interestingly, he said though he realised early in life that he had 'detective qualities', he did not know the exact future career to pursue.

In the company of his brother, Mr Quantson talked about his humble beginnings at Axim, in the Western Region, where he was born and bred, about 75 years ago.

He said due to the frequent transfers of his father from one place to another as a civil servant, he spent the early part of his life with his maternal grandmother, a God-fearing woman who made prayer the centre of her life. He said his grandmother had a lot of impact on his life with her spirituality and moral values such as honesty, humility and an enterprising spirit.

Because his grandma was a farmer, he was introduced to farming early in life.

'I was only five years old then, so I did only petty chores such as collecting cassava sticks and twigs for lighting fire. I also carried small loads home.'

But going to the farm was not all about work for him, he said. It was also fun as he used to chase lizards around and also learnt to appreciate nature.

'Through the sounds of birds, I was able to tell the time during the day because we had no watch at that time.' When he was seven years old, he went to live with his paternal auntie, a baker.

'I sold bread every morning before I went to school. And because I didn't want to be late for school on my return, I bathed and dressed up in my school uniform before going off to sell. I usually touted for business, 'paano wa ha' (meaning bread is available here)' on the streets of Axim to attract customers. In the evenings, he sold kerosene.

Mr Quantson said he never felt shy selling all those things, because he had no choice. “I just had to sell”. He also attended Sunday School regularly because failure to do so attracted punishment at school the following day. Naughty as children could be, he said sometimes, he sneaked out of Sunday School to play, and recalled an occasion that he was caught and caned the following day at school.

But the worst thing, however, was that a reverend minister who administered the punishment went further to inform his father, who whipped him again.

“And you know something, I thought it was unjust for the reverend minister to do that, and so I took an immediate dislike for him,” he confessed.

When Kofi moved in with his father and stepmum to Takoradi at age 13 , he had to go to the market every morning before going to school. As a result, he was always late for school and thus missed morning mental test, so 'l was regularly lashed, because it was assumed that l had scored zero.'

But despite the problems he faced in Takoradi, it was there that he had the opportunity to study in the evenings with electricity, instead of the lanterns he constantly used while at Axim.

Surprisingly, with all his professional credentials, Mr Quantson did not attend any of the well-known secondary schools. He attended Clayborn College, Sekondi, an unassisted (private) secondary school as it was called in those days.

He described the teaching in the school as rather awful, therefore, during school vacation, he used to compare his notes with his friends from other schools and where he had any problems, he asked for help. Even during school holidays, he would still go to the farm or sometimes fishing with his uncle.

After his senior Cambridge Examination, Mr Quantson trained as a teacher at Wesley College, Kumasi, where he taught in a number of schools before pursuing further studies at the University of Ghana, Legon. After university education, he worked as a journalist at Ghanaian Times before joining the Special Branch of the Ghana Police Service.

Mr Quantson is married with children.