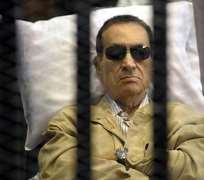 Hosni Mubarak, toppled by an uprising last year after 30 years ruling Egypt, was sentenced to life imprisonment on Saturday for his role in killing protesters after a trial that sets a precedent for holding Middle East autocrats to account.

But it was not enough for thousands of Egyptians who poured onto the streets after the verdict. Some wanted Mubarak executed, others feared the judge's ruling exposed weaknesses in the case that could let the former military strongman off on appeal.

Protesters gathered in Cairo's Tahrir Square, focus for the uprising that drove Mubarak, now 84, from office on February 11, 2011. Others in the second city of Alexandria chanted: "We are done with talk, we want an execution!"

The ruling came at a politically fraught time for Egypt, two weeks before a run-off in its first free presidential election that will pit the Muslim Brotherhood, which was banned under Mubarak, against the deposed autocrat's last prime minister.

Mubarak was wheeled into a courtroom cage on a hospital stretcher to join co-defendants including his two sons Alaa and Gamal, former Interior Minister Habib al-Adli and six security officials.

"The court has ordered a punishment for Hosni Mubarak of life in prison based on charges of participating in crimes of killing and attempted killing," Judge Ahmed Refaat told the hushed courtroom.

Propped up on the hospital stretcher and wearing sunglasses, Mubarak heard the verdict stony-faced. He was acquitted on a separate corruption charge.

Refaat sentenced Adli to life in prison but acquitted the senior security officials for lack of evidence.

He quashed charges against Mubarak's sons, relating to abuse of power and graft, but a new case brought against them this week for stock market fraud will keep them behind bars for now.

Businessman and Mubarak ally Hussein Salem, being tried in absentia, was acquitted of corruption charges.

After a silence during sentencing, scuffles broke out inside the court between security officers and people chanting "Void, void" and "The people want the cleansing of the judiciary".

It was the first time an ousted Arab leader had faced an ordinary court in person since a wave of uprisings shook the Arab world last year, sweeping away four entrenched rulers.

Rather than a healing experience that many Egyptians wanted, many saw the trial that acquitted top security officials as showing how much of Mubarak's old order was still in place.

ISLAMISTS CALL FOR PROTESTS
Islamists and others called for protests on Saturday. But some Egyptians said Mubarak's sentencing was enough, even if they were unhappy that security officials were off the hook.

"I think the verdict on Mubarak is fair, he is over 80 years old and a life in prison verdict is a hard one, as it means he will certainly spend all his remaining years in jail," said Ahmed Raouf, 30, who works at a private Cairo computer firm.

The Muslim Brotherhood demanded a re-trial for Mubarak, who made Egypt into a staunch Arab ally of the United States.

"The public prosecutor did not carry out its full duty in gathering adequate evidence to convict the accused for killing protesters," said Yasser Ali, campaign spokesman for Brotherhood presidential candidate Mohamed Mursi.

Mursi has vowed that if he is president, he would use the courts to ensure his predecessor stayed in jail. "It is not possible to release Mubarak," he told Reuters on Thursday. "I promise the martyrs, we will retrieve their rights in full, God willing."

About 850 people were killed in the 18-day revolt that toppled Mubarak.

Ahmed Shafiq, Mubarak's last prime minister, a former air force chief like his old boss and Mursi's opponent in the presidential run-off, calls Mubarak a role model. He said on his Facebook page that the trial showed no one was above the law.

"This verdict brings Egypt back to its leading regional role as the country witnesses the first condemnation of an Arab pharaoh who ruled for 30 years," said Nabil Abdel Fattah from the Al-Ahram Centre for Political and Strategic Studies.

But he said the verdict would be a political football in the election. He said Mursi wanted to show he was the only one who could reform the system and Shafiq would seek to prove that this showed the judiciary could deliver a tough sentence, despite criticism of the ruling by protesters.

Shafiq has vowed to restore order swiftly after 15 months of turmoil that has left many Egyptians exhausted. Any new violence could swing other ordinary Egyptians behind him.

State television said Mubarak, suffered a "health crisis" when he was taken by helicopter from the court to Cairo's Tora prison, where he was admitted to a hospital facility. Mubarak had been held at a luxurious military-run hospital during the 10-month trial.

One medical source said Mubarak had argued with those around him when he had landed at Tora, refusing to leave the aircraft.

Mubarak routinely appeared in court on a stretcher, but it is not clear what ailed him. He had occupied a large hospital suite and was free to see relatives, walk in the garden and exercise, news reports and a hospital source said this week.

Al Jazeera reported that Mubarak would lodge an appeal. His lawyers could not be reached immediately for comment on the report.

Outside the court, Soha Saeed, wife of one of those killed during the anti-Mubarak revolt, shouted: "I'm so happy, I'm so happy." But, as the details of the verdict sunk in, protesters clashed with police, hurling stones and criticising the court.

Despite Mubarak's life sentence, lawyers acting for the families of victims in the uprising said the acquittal of the six security officials showed the weakness of the prosecution case and suggested the jailed president could win an appeal.

"Regarding accusations against the police leadership, the court is of the opinion that none of the actors who committed the crimes of murder were caught during or after the events, so there is no direct evidence for the charges," the judge said.

Charges against the six included complicity in killing protesters and failing to prevent damage to public property.

New York-based Human Rights Watch said the ruling "sends a powerful message to Egypt's future leaders that they are not above the law".

But it said acquittals of security officials due to insufficient evidence "highlights the failure of the prosecution to fully investigate responsibility for the shooting of protesters", a possible green light for future abuses.

The lawyers for the victims' families said the verdicts against Mubarak and Adli were designed to appease public anger while leaving room for them to be overturned on appeal.

"DEEP DARKNESS"
Refaat opened Saturday's proceedings by hailing Egyptians for removing the only leader many of them had known.

Yet many Egyptians are still waiting for the light - the messy trial and its aftermath typifying the chaos and confusion that have marked a political transition led by the military.

The ruling army council that took over when Mubarak quit has promised to hand over to a freely elected president by July 1.

But many Egyptians are fuming that the pillars of Mubarak's authoritarian rule, including the hated police force, have survived his downfall intact.

Hundreds marched on the supreme court building in central Cairo. A number of them hurled stones that smashed windows, but others shouted "Peacefully" at them, stopping the violence. In Tahrir, some protesters burned Shafiq's campaign posters.

Few Egyptians had expected Mubarak to be put to death, although protesters have often hung his effigy from lamp posts.

Hanafi el-Sayed, whose 27-year-old son was killed early in the uprising, travelled from Alexandria for the trial.

"I want nothing less than the death penalty for Mubarak. Anything less and we will not be silent and the revolution will break out again," he said shortly before the verdict.