Edwards Found Not Guilty On One Count; Mistrial On Others 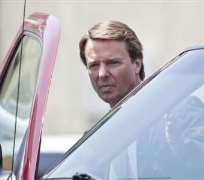 Jurors acquitted former U.S. Senator John Edwards on one count of taking illegal campaign contributions on Thursday and the judge declared a mistrial on five other counts because the jury was deadlocked.

Edwards, who did not testify in the trial, was found not guilty of accepting illegal campaign contributions from supporter Rachel "Bunny" Mellon in 2008. Prosecutors argued he used funds from Mellon as well as another wealthy donor during his 2008 presidential campaign to keep voters from learning he was cheating on his cancer-stricken wife, Elizabeth, who died in 2010.

The mistrial ruling came after the jury said it could not reach a verdict on the remaining five charges on the ninth day of deliberations at the federal courthouse in Greensboro in North Carolina, the state Edwards represented in the U.S. Senate from 1999 to 2005.

The defense said the supporters' money was meant as a personal gift to shield Elizabeth Edwards from her husband's indiscretions, not to influence the election.

Asked on Thursday how he felt following the acquittal and mistrial, Wallace Edwards, the former senator's father, pointed at the smile on his face. "This says it all," he said.

Earlier in the day, the jury announced it had reached a decision on a single charge, Count 3, but did not reveal the verdict.

U.S. District Judge Catherine Eagles sent the jury back for more deliberations. The jurors came soon came back and said they were deadlocked, prompting Eagles to declare the mistrial on five counts.

The panel was considering whether Edwards, 58, violated election laws as he sought to cover up his affair with videographer Reille Hunter and her pregnancy with his child during the 2008 campaign for the Democratic presidential nomination. The child, Quinn, is now 4 and lives with Hunter.

The two-time presidential hopeful who served as the Democrats' 2004 vice presidential nominee faces possible prison time and fines if found guilty of any of six felony counts.

The charges include conspiring to solicit the money, receiving more than the $2,300 allowed from any one donor, and failing to report the payments as contributions.