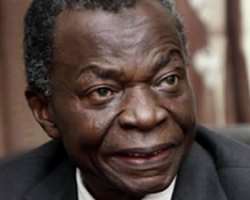 ABUJA, May 30, (THEWILL) - Suspended president of the Court of Appeal, Justice Ayo Salami is a step closer to securing his reinstatement, as a Federal High Court in Abuja on Wednesday dismissed a suit filed by one Noah Ajare, who sought a court order to stop President Goodluck Jonathan from acting on the recommendation of the National Judicial Council (NJC) for Salami’s recall.

The plaintiff, a lawyer, sued the NJC) and the Judicial Reform Committee, seeking a declaration that all meetings, discussions and recommendations for Salami’s reinstatement be put on hold, as it is illegal, unconstitutional, null and void.

He also said Salami’s suit challenging his suspension was still pending in court and that taking any step to reinstate him would further undermine the rule of law.

Dismissing the suit, however, Justice Abdul Kafarati said the plaintiff lacked the locus standi to institute the action, and that the issues involving the suspension and reinstatement of Salami could be resolved without his presence.

He said the Judicial Reform Committee was not a creation of the law; and as such, it could not be sued. The court held that membership of the Nigerian Bar Association (NBA) did not confer locus standi on the plaintiff.

It will be recalled that attorney general of the federation and minister for justice, Mohammed Bello Adoke (SAN) had said that Jonathan could not consider NJC’s recommendation of Salami’s recall because of pending cases.

However, another similar case is still pending before the Federal High Court in Abuja.

Ajare had joined the president and the attorney general of the federation (AGF) as 1st and 2nd defendants respectively.

In an originating summons, he asked the court for a declaration that all meetings, discussions and recommendations for Salami’s reinstatement by the president, based on the NJC’s recommendations must best be put on hold, as it is illegal, unconstitutional, null and void, as the matter was sub judice.

He premised this declaration on the ground that the suit filed by Salami was still pending in court and that doing anything at this point would further undermine the rule of law.

The plaintiff further sought an order of perpetual injunction restraining the defendants from implementing, discussing and/or ratifying the recommendations of the NJC in respect of Justice Salami, pending the hearing and determination of court actions in order not to create a wrong precedent.

The plaintiff, in a 22-paragraph affidavit deposed to by one Omolara Adeogun of Victory Chambers, averred that the plaintiff was not against the reinstatement of Salami but wanted due process to be followed.

She further said that the matter had assumed a national character, and therefore demands caution. She said that if there was no extant order of the court, the 1st defendant may pre-empt the due process of the court.

She also averred that the face-off between the former CJN and then PCA shook the entire judiciary to its very foundation, and it climaxed when the PCA instituted a court action against the then CJN at the Federal High Court, and that there has been a grave concern among Nigerians, particularly at the Bar, about the integrity if the judiciary.