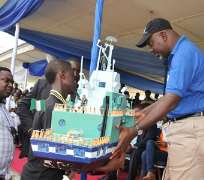 CALABAR, May 28, (THEWILL) - The efforts of the Cross River State Government to improve the lot of its youths through various intervention programmes have not gone unnoticed, as a youth from Calabar South LGA, David Henshaw, showed his appreciation by presenting a model of a ship to the governor during the 2012 Children’s Day Celebration.

According to Henshaw, the present was to appreciate the youth development initiatives of the governor, such as comprehensive renovation of primary and secondary schools, free medical treatment for pregnant women and children under five years, and conditional cash transfer for indigent families tagged, Project Comfort and Project Hope.

The youth, who said he spent N40,000 to construct the boat, also commended Imoke for instituting the Bridge Leadership Foundation, which is focused on building leadership qualities and entrepreneurial skills of youths.

Receiving the boat, Governor Imoke thanked the donor for acknowledging his efforts in reaching out to the youth across the state, and explained that apart from the educational and health programmes being put in place, government has also established the Department of Orientation and Public Affairs to enable youths imbibe core values to better their lives.

He said the model, which is a pride to the state, will be placed in his office; and he promised Hensaw a donation of N200,000 that would enable him build more models.

Moses lauded the wife of the governor, Mrs. Obioma Liyel Imoke for her various child-friendly activities, which other states should emulate. She congratulated the children for the celebration and wished them a wonderful occasion while urging them to be obedient, law-abiding and also to be their brother’s keeper.

She described the theme for the celebration, Let’s Build a Culture of Peace and Security for the Nigerian Child as a wakeup call to tackle the challenges children face in the country.

Commissioner for Women Affairs, Mrs. Edak Iwuchukw said there was need to celebrate the children. Commending Governor Imoke and his wife for their notable agenda for children, she maintained that the state would continue to uphold the rights of the child against all forms of abuse and molestations.