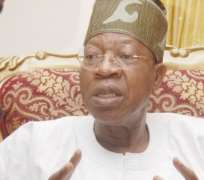 LAGOS, May 23, (THEWILL) - The Action Congress of Nigeria (ACN) has criticised Tuesday’s statement by the attorney-general of the federation (AGF), Mohammed Adoke, that reinstating Justice Ayo Salami, as recommended by the National Judicial Council (NJC), will amount to 'subjudice,' describing it as the clearest indication yet that Jonathan’s administration lacks honourable character.

In a statement issued in Lagos on Wednesday by its national publicity secretary, Alhaji Lai Mohammed, the party noted that the statement has equally confirmed the widely held belief that Salami's suspension was orchestrated by the presidency in the first instance, as part of a wider plan to cow the judiciary and silence upright judges.

“In the end, this is all about the Peoples Democratic Party (PDP) losing Ekiti and Osun states, which it appropriated to itself through a most shameful and egregious electoral heist, rather than the consequences of the disagreement between the nation's two top judicial officers over the Sokoto election,” the statement stated.

“AGF Adoke's shocking and disingenuous statement has also exposed the reason behind the temerity of Segun Oni and Olagunsoye Oyinlola to continue to assault the judiciary and anyone who had anything to do with the cases in Ekiti and Osun states. After all, they know they have the backing of the attorney-general and the presidency.”

ACN further said the moral deficiency of Jonathan's administration has been

body that recommended it.
ACN, in an earlier statement, had said it was willing to give the president the benefit of the doubt over speculations that the presidency was masterminding the litigations against the reversal of Salami's suspension.

“However, it is now clear that the morally-challenged administration is actually the unseen hand behind such frivolous lawsuits, which have now been latched on to by the same presidency as the reason why Justice Salami cannot be reinstated,” the statement concluded.

“By his statement, the AGF has also confirmed that the Executive is the one fomenting the crisis in the Judiciary, simply to serve political ends, a very dangerous game in an emerging democracy. As the AGF plays the Ostrich, he forgets that Nigerians cannot be hoodwinked by such untenable explanation of the reason

for the presidency's refusal to reinstate Justice Salami.

“He forgets that Justice Salami had already instituted a lawsuit against

the NJC before he was suspended. He forgets that the NJC, which is a defendant in the case, knew what it was doing when it recommended the reinstatement. And he forgets that part of the overall resolution of the crisis is the request by the NJC that

all cases pertaining to it should be withdrawn.”

ACN then expressed shock that “the administration could so easily miss a rare chance to show that it is a government with honourable character — perhaps the most important attribute of any government that is worth that name.”

It censured President Jonathan for “sacrificing honour on the platform of political expediency,” choosing “to take what he considers the 'safe' way out on an issue that calls for courageous leadership,” saying he had failed to rise to the occasion

at a crucial moment.