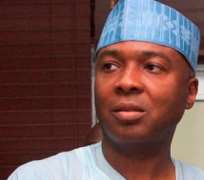 ABUJA, May 23, (THEWILL) - A Federal High Court in Abuja has condemned, in strong terms, the issuance of a warrant of arrest for former governor of Kwara State, Dr. Bukola Saraki.

Ruling on Wednesday on Saraki's application to stop the Police from arresting him, Justice Gladys Olotu said the Police undermined the authority of the court by issuing a warrant for Saraki's arrest and declaring him wanted after they (the Police) had submitted to the jurisdiction of the court.

She also set aside the order issued by the Police declaring Saraki wanted on the ground that such an order foisted a fait accompli on the court.

Rejecting the arguments of Police counsel, Mr. Femi Falana, that the court did not have the power to stop the Police from carrying out its constitutional duties, Olotu held that once a party has submitted a dispute to the court and the other party has been served, the proper step to take is to allow the court to determine the dispute.

She rejected the arguments of Falana that even armed robbers could come to the court to stop their arrest, hiding under the rule of law. She said the plaintiff's case had been overtaken by events. “I am of the view that the plaintiff has unfettered right to come to court,” she added.

The judge noted that the Police admitted to obtaining a warrant while the case was pending and also executed the warrant in the public domain instead of serving it on the plaintiff.

“The Police's excuse is untenable. It would have been wise to await the decision of this court. They undermined this court and should have come to this court if they became aware that the plaintiff planned to run,” she said.

“It was this court that should have issued the warrant. It is this court that should have declared him wanted. This is because the Police's power to do anything has been technically suspended. The sanctity of the rule of law must be protected at all costs and at all time. The warrant of arrest and the order declaring him wanted are hereby set aside. This case is hereby struck out.”

Rabana had asked the court to make pronouncements on the action of the Police declaring Saraki wanted when he had already filed a suit and the Police had been served with the court process.

“The steps taken by the Police had undermined the process filed,” he said. “This is not in the best interest of justice and the tenets of rule of law. When parties had submitted themselves to the jurisdiction of the court, parties ought to stay action.

This is a condemnable act which this court should view seriously as undermining the processes before this court.”

But Falana argued that the warrant for former the governor’s arrest was issued by a Federal High Court in Lagos, a court of competent jurisdiction. He also told the court that Saraki was declared wanted when the Police got wind of his planned escape.