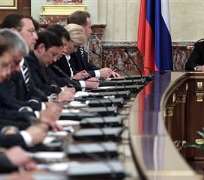 Putin, 59, opted for continuity by retaining his ally Igor Shuvalov as first deputy prime minister in charge of economic policy, while Igor Sechin will remain his energy chief in a role outside the government.

The former KGB spy consolidated his hold over the "power" ministries by naming Moscow police chief Vladimir Kolokoltsev as interior minister, in a sign of trust in a man who has at times used heavy force against protesters demanding Putin quit.

"Work will be difficult, given the concrete situation in the world economy," Putin told a meeting in the Kremlin, where he sat at the head of the cabinet table with Medvedev to his right.

An important test of the government will be the speed at which it implements a privatization program and a drive to reduce the dependence of the $1.7 trillion economy on oil and gas exports.

Putin has also faced the biggest protests since he was first elected president in 2000, caused initially by allegations of electoral fraud but fuelled by anger and frustration that his 12-year domination of Russia has been extended by six years.

The opposition, representing a civil society that is finally emerging more than two decades after the collapse of the Soviet Union, says its views are being ignored and Putin is stifling economic and political reforms in the world's largest country.

His appointment of Kolokoltsev to the Interior Ministry sent a clear message that he does not intend to bow to the protesters' demands for more political choice and the end of a political system imposing strong central control over a country sprawling from the Baltic Sea to the Pacific Ocean.

"This is a man who breaks up peaceful meetings with the help of cudgels," opposition leader Boris Nemtsov told Reuters. "This all fits into the logic of modern Putinism."

GROWTH AGENDA
Medvedev, 46, named premier after Putin returned to the Kremlin on May 7, has said he will push pro-growth policies and the privatization drive.

But, even though the partners in Russia's ruling 'tandem' announced they had agreed to switch jobs last September, the long and secretive process of forming a government raised concerns that it would be riven by factional conflict.

The line-up brought in a couple of new faces from the team of young market liberals that served in the Kremlin during Medvedev's four-year term as president, during which he promised far-reaching reforms but carried out few of them.

One, Arkady Dvorkovich, was named among six deputy premiers and was expected to have responsibility for energy and industry policy - areas over which he had little influence while serving as Medvedev's economic adviser.

The energy minister's job went to Alexander Novak, a former deputy finance minister, indicating that Sechin would maintain control over Russia's strategic oil and gas sector despite leaving the government.

Another Medvedev aide, former power industry boss Mikhail Abyzov, missed out on an energy role and was named last on Putin's list as coordinator of an "open government" forum backed by Medvedev that has until now produced talk but little action.

Putin, who stepped aside as president in 2008 because of constitutional limits, extended his influence over economic policy - traditionally the preserve of the prime minister - by ensuring that the finance and economy portfolios were taken by placemen who support his credo of state-led development.

NOT A BREAKTHROUGH
"This is not a breakthrough government," said former Finance Minister Alexei Kudrin, a fiscal hawk ousted from government last year in a power struggle with Medvedev. He is still close to Putin and has been named as a possible future prime minister.

"I doubt greatly that it will be able to rise to the challenges facing Russia."

Analysts said the cabinet would probably lack independence. They looked to the Kremlin team being formed by Putin for clues on the direction of policy during his six-year term, after which he could seek re-election and try to rule until 2024.

"This cabinet will be one that is not fully independent from the Kremlin," said Tom Mundy, chief strategist at Moscow brokerage Otkritie. "The market might may be slightly disappointed not to see more high-profile liberal names."

Although latest figures show Russia's economy grew at a 4.9 percent rate in the first quarter, that has been pumped up by lavish pre-election spending that has driven up the oil price at which Russia's budget will balance in the future.

"The oil curse will get us sooner or later," said German Gref, head of Russia's largest bank, Sberbank. "The government has no option but to create a favorable climate for investment and growth."

Gref's bank is at the top of a list of state assets slated for privatization, but the sale of a 7.6 percent stake planned for last September has been repeatedly delayed.

Shuvalov recently vetoed a near-term sale due to poor market conditions, that have since deteriorated further, reducing the value of the stake to $4.3 billion.

The English-speaking lawyer is seen as one of the few officials who can mediate in the battles for power and influence between the market liberals and another faction of men with a background, like former KGB spy Putin, in the security services.

"Shuvalov ... has been a proponent of privatization in the past. Whether it goes ahead and at what speed ... depends on the oil price," said Peter Westin, chief economist at Moscow brokerage Aton.