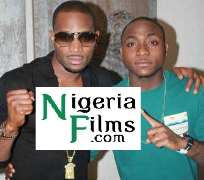 According to what we gathered, Davido was signed by D'Banj on Wednesday, May 16 after a series of meetings in the United States of America and Lagos.

Informants told Nollywoodgists.com that the deal was celebrated at the weekly Industry Nite in Lagos last week Wednesday.

Further information reveals that Davido might be unveiled as Def Jam Africa artiste, which D'Banj is tipped to head based on his experience of the African terrain.

Meanwhile, we scooped that Davido will launch his first album on July 15 at Eko Hotel and Suites, Lagos.

We learnt that Davido should be on his way to London to meet D'Banj.