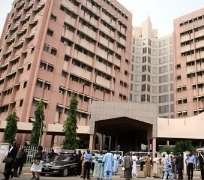 Instead of mother-witch's affairs improving, all the children she bears turn out to be female; birds climb upon birds. (Despite all efforts the fortunes of a person continue to be bad.)

Her full name is Iyabo Emeka- Abdulahi; we had a chat...She works in one of those Ministries in the Federal Secretariat, Abuja.

The following is her story and I am sharing it...at the end, maybe you and I would be challenged to be change agents in our small way.

Before Iyabo joined the civil service, she told all that cared to hear--"My dear, I dey find dat civil service work you no say na dat one be correct newspaper work. No job sweet like that, you go resume work by 9 or 10am as it suits your whim and caprices, depending on the Ministry or parastatals..."

If your office can afford newspapers, and some boss has not 'colonized' the money for it or the paper itself. You get to read free newspapers filled with the looting exploits of 'super civil servants and politicians, these days most offices don't have televisions anymore and those that have, are constrained and cannot afford pay-tv, that provides music for young men in the service and nollywood movies for the not-too-young at heart.

They make do with good old NTA; the local tv would provide entertainment from the many installments of the soap called the 'Probes' featuring legislooters and civil servants that are robbing daylight out of Nigeria.

In addition there are lazy curriculum activities, like knitting, two-fighting; gossip is an integral part of work- it starts almost immediately. Others are testing their 'juju' which was gifted them on their last visit to the village.

All sorts of gists: There is always someone having an affair with one boss or subordinate, while one is having a baby for the other- a crass reflection of what is wrong with us.

Office market is in session simultaneously. You are either selling something or buying one thing, from wrapper to homemade bean cake. Note, it’s always on credit till next pay-day, after all even government 'dey owe person'.

Office closes by 12noon that is if there are no office religious fellowships or prayers, or in local parlance 'bad as e bad' between 2-3pm, the day's lazy task is done, even though official closing is 4pm.

Work closed: You carry your bag dey go house.
You learn to complain about everything and nothing. How your boss doesn't or won't allow you steal or steal enough. How they won't teach you how to steal big or give you crumbs from monies that you collectively stole.

How you need to go home and marry your husband. Take care of your children with the peanut salary. Then complain as you go home or when you reach home.

Meanwhile your bosses tell you the stealing is turn by turn, wait for your turn. Yes o! So you get to cool down till your own time comes.

How can Nigeria be better when people fine tune how to steal money and even set a target like in marketing...how much they will steal in five, ten years time?

Those already in the service belong to one church fellowship or the other. Meanwhile there is a small mosque area, while others go to see their malam, yet stealing continua, work uncertain.

There is hope you will 'hammer' (Make it big). If Nigeria was a person she would beg for mercy killing.

Iyabo was going to get in through a Senator so she won't be a ghost worker, because in the civil service you are either a ghost worker or dead pensioner.

This nation is really supposed to be at the intensive care, but the truth is that, actually we are on life support. With civil servants like Iyabo, 'It is well' even in the well. Many say there will be light at the tunnel's end. Others' say na tunnel at the end of the light.

Our own things are different; I say due to power failure, there is no light throughout the whole tunnel.

Only recently a civil servant like Iyabo saved $544,000 in her bank from pure sachet water business in just 2 years. A visit to the secretariat makes you appreciate us, you see a blind beggar reject a fake N10 note.

While this is Iyabo's story, there is a Mohammed, Emeka or Akin in us all, whether in civil service, private practice, blue, white or black collar.

I end with this anonymous short fable.
There was a man taking his morning walk on the beach. He saw that along with the morning tide came hundreds of starfish and when the tide receded, they were left behind and with the suns’ morning rays, and many would die.

The tide was fresh and the starfish were alive. The man took a few steps, picked one and threw it into the water. He did that repeatedly.

Right behind him there was a young boy who noticed and couldn't understand what this man was doing. He caught up with him and asked, "What are you doing? There are hundreds of starfish. What difference does it make?"

This man did not reply, took two more steps, picked up another one, threw it into the water, and said, "It makes a difference to this one."

After hearing why the man was doing this, the boy bent down, picked up a starfish and threw it back in the ocean. Then he smiled and said, “I made a difference for that one.”

Iyabos abound everywhere, local to state and federal, Abdulahi in Nigerian Police, the army, PHCN, the several millions of Akins that are teachers, all contributing nothing, making no difference, just part of the symptonic failure

One kills the roots of the ìrókò tree while it is still a sapling; when it matures it is out of control. One should take care of problems before they become unmanageable. Will you make a difference in Nigeria today or remain part of an out of control Iroko tree --time will tell?