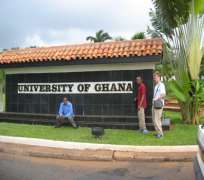 Ghana is an attractive country for Nigerian students seeking to study abroad. The reason for this is that both countries not only share similar historical experiences, they both have linguistic and educational resemblance having shared the same colonial masters.

These universities are universally acclaimed as citadels of knowledge. They enjoy standard infrastructure and they can easily access intellectual co-operation from the global educational community.

There is another class of universities and most of them fall within the grouping. These are private universities – either privately owned by individuals or faith-based organizations. They are duly accredited by the National Accreditation Board of Ghana.

Basically they are affiliates of the more established public institutions. What this means is that their curriculum and facilities are directly supervised and scrutinized by the mother universities. Their curriculum, course materials, outlines and all pedagogical structures are constantly assessed by the affiliated school.

Another feature is that the degrees and certificates are issued in the name of and awarded by the mother university. But the transcript of the student can only be sent by the offspring private university on request.

This supposed collaboration and affiliation between private universities and those of government appear to have shored up their credibility.

For instance in the same 2012 world ranking of top universities in West Africa, Presbyterian University, one of Ghana's faith-based private universities was mentioned. The school is affiliated to the University of Cape Coast. It has five campuses located in Tema, Abetifi, Agogo, Akropong and Akuapem.

Government has opened up the space for private sector participation. Consequently there is the proliferation of private universities and other public institutions. They range from faith-based institutions to the purely commercial ventures.

Some of the foreign and accredited private institutions have their onshore campuses in Dubai and India. Like their local counterparts, they assert that their mother universities back home award degrees and certificates. They declare that they are only outreach centres (study centres).

The Dubai and India universities claim that they collect USD1,000 per session for degree courses and a little over that for masters' programme. Other incentives include free books and laptops for students, according to them.

The disquieting trend is that some of these institutions may offer just one course and undertake diploma, higher diploma, degrees and masters' certificates. One of such institutions with about 90 per cent of its students from Nigeria only offers Information Technology and Management.

During my investigation, I discovered that some of these foreign universities were established wholly as commercial ventures. For instance one of such is located in the heart of the city. It is registered as a business, but has been given the franchise to operate in the name of a university based in India. It offers three courses: Information Technology; Mass Communication and Journalism and Business Management. It awards diplomas, degrees and masters in the listed disciplines.

This same school uses agents to entice unsuspect ing students, especially from Nigeria to register with them. In return, they are given mouth-watering financial rewards; the higher the number of students you bring the bigger your profit.

Some consultants do this as a vocation, they have middle men both in Ghana and Nigeria and their task is to get as many Nigerian victims as possible. They engage in aggressive marketing, practising their crafts through publication of hand bills and distributing them in strategic places like the airports and major transport companies that operate within the West Coast. Their main targets, though, are Nigerians.

The students in the so-called universities are not left out in the scam. The norm is that they too, through swaying, get their friends and relatives enrolled and get paid handsomely. The result is that the institution is growing astronomically.

Another snag is that the university operates from a storey building. They claim their teaching techniques are flexible so you may not need to be at lectures, as long as you can regularly access the course materials on the internet.

Unlike the conventional four-year duration for a degree programme as obtainable in Nigeria, the length of study for a degree is three years in this school and other institutions from India -Dubai-axis. You do not have to obtain the required number of credits before gaining admission. You could do remedial courses whilst the university education is on going.

The ensuing uproar caused analysts to doubt some of these celebrated private universities that have sprouted in Ghana.

The colourful and enticing billboards of these institutions are ubiquitous. A visit to most of them leaves one in doubt, as to how reputable they are indeed. There is another university at East Legon, Accra metropolis, and it is accredited by the National Accreditation Board and also affiliated to one of the prestigious public universities. It operates from one storey building. Beforehand, it used to be a car shop.

There is also one around Lapaz, still in Accra. It shares a three storey building with NIIT, business centres, salons and fashion shops. It operates on only one of the floors on the building. It offers only two courses in Information Technology and Management studies. The school is not accredited by Ghanaian educational authority. It has a student population of 200 and 90 per cent of them are Nigerians.

Dr. Emmanuel Ifeanyi Ani, a Nigerian lecturer in the Department of Philosophy at the University of Legon revealed that some individuals were cashing in on the high rating of Ghanaian universities to create private ones for purely materialistic considerations.

He posited that learning under such objectionable conditions as obtainable in some of the so-called universities could impede learning.

“The students need space. For instance, an average classroom should have all the facilities to encourage learning. An average classroom here (University of Legon) is properly ventilated. It has a board, not a chalk board, but a board that uses makers. It has projector. We teach with projectors and it makes teaching much more visual,' he stated.

Consequently, he counselled parents to be selective of the universities they send their children to in Ghana. He said that it was fruitless to earn a degree from a private university that ultimately would highly limit one's scope.

An official of the Nigerian High Commission in Ghana, Mr. Mohammed Kurmawa agrees with this assertion.

“There is preponderance of Nigerians, most of them in some institutions that the embassy is not comfortable with. But when parents seek information from us we do our best to give them the names of the institutions that are recognized and of standard,' he stated.

The Nigerian envoy affirmed that the reason many of them opt for the mushroom universities is because of the flexible nature of admission requirements, low tuition and lowered standard as well as the nonchalance of some parents to the future of their children.

He blamed parents for allowing their undue desire for their children and wards to obtain university education to becloud their sense of judgment about the institutions they should attend.

The outgoing President of the National Association of Nigerian Students (NANS), Ghana Chapter, Michael Opeyemi Ige, lent support to the ensuing discourse about the avalanche of questionable private universities Nigerians attend in the country.

“Some of them the structures are not there and some of them are not accredited. You also have the accreditation board, so you can confirm before bringing your child or paying the school fees else at the end the consequences could be unpalatable,” he maintained.

Abhishek Tyagi, General Manager, Sikkim Manipal University, an India University duly accredited by the National Accreditation Board differed sharply with Ani, insisting that the standard of a university is not determined by the size of the institution.

The Director of Academics, Mahatma Ghandi University, headquartered in India, Dr. S. Patnalk, also argued along this line saying, “when you want to access education, you do not look at the size of the infrastructure.

“If the student for instance is not happy, even though it is a big infrastructure, his performance will be affected. Although infrastructure is an important component of university education, the most important aspect of any university is the knowledge they impact,” he averred.

Apart from the fact that many half-baked Nigerians are turned annually out from these universities, swelling further the population of 'uneducated and unskilful graduates', the economic implication is also damning.

A Nigerian student told Daily Trust that Nigeria loses a staggering USD2 billion to Ghana annually through remittances to students in the country.

The reality about being a foreign student in Ghana is that you have to pay prohibitive amount of money as tuition. The lowest fee paid by a foreign student in the University of Legon is USD 5,500 per session. It was slightly scaled down sometime last year from USD 6,000.

The University of Cape Coast charges foreign students USD 6,000 for the least paying faculty. Medical students in the institution pay USD 10,000 per session. There is another high fee paying private university in Accra which collects USD 15,000 per session.

This excludes the cost of feeding, accommodation, transportation and books. The cost of living in Ghana is quite high, leaving most residents economically strangulated.

Students from less affluent background also find themselves in some of these questionable universities; the institutions in this category charge as little as USD 1,000 per student for a session. Some get duped in the process by 'consultants', who now make fast business from desperate and unwary students, who seek admission from anywhere without investigation.

Ige cautioned parents and their wards to be wary of consultants who act as middle men for prospective students in these institutions.

“We have heard a number of cases of such incidents; of people coming around to say that they were duped. They are asked to pay USD 2,000. No school in Ghana charges that amount. I don't want to ruin anybody's market, but the truth is that I do not know why somebody will have to go through an agent. You have the schools here. You have their phone numbers you can make contact with them.

The Nigerian don at the University of Legon brought another perspective into the discourse on excesses school fees demanded by the Ghanaian universities, stressing that school fees were hiked up because of the high traffic of Nigerians in the universities.