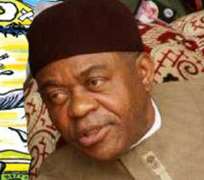 By LAJA THOMAS
ELEVEN days to the end of the first year of his second tenure, Governor Theodore Orji of Abia State has presented his scorecard to the state's indigenes resident in Lagos. It was an interactive session with executives and members of different town unions, women groups, youth associations and other critical stakeholders in the Abia State project to intimate them on the activities of government since he came into office five years ago.

The governor was represented by his Chief Economic Adviser, Chief Chijoke Nwakodo, who also doubled as the chairman of the occasion. State Liason Officer in Lagos, Chief Felix Azuh, Special Adviser on Diaspora, Chief Kingsley Megwara and Special Adviser on Public Relations whose office organized the forum, Barrister James Okpara, were also present.

Gov. Orji
Nwakodo said Orji could not come for the event because he went to Adamawa State to be with the PDP national chairman and PDP governors. And the previous day he attended the burial of Chief of Army Staff, Gen.  Ihejirika's father-in-law. Ihejirika  is a proud son of Abia State.

At the packed interactive event held at Ojez Place inside the National Stadium, Surulere, the government presented a comprehensive side show of some of various projects executed across the state by the Ochendo administration.

As the screen came alive and the slides began to roll, Megwara provided further explanations and shed more light on what the people were being shown.

Earlier, Okpara had told the gathering that the reason for the interactive session was for the indigenes to be adequately informed about the development back home instead of depending on rumours, which he said had become the trademark of some politicians in the state, who were no longer relevant in the scheme of things. He emphasized that all that they were about to see were done and executed by the T A Orji administration without borrowing a kobo, an announcement that was greeted by a rapturous clapping.

'It is important that we let all of you, our brothers who are the executives of your town unions know what is going on at home. We live in a global village where information travels very fast. And where some failed politicians have made it a trademark to peddle and sponsor rumours against the government.

We felt you should see things for yourself and form your own judgment or opinion. But the important thing I want you to know is that the administration of Ochendo has done what you are about to see without borrowing a kobo from anywhere. After you have seen these things, you are free to ask question and air your observations', he stated.

Megwara explained the rationale behind the move by the government to relocate the Umuahia Main Market. According to him, the status of Umuahia as a state capital is of much concern to the governor. And his plan is to transform it from a glorified town to a commendable state capital that all Abians can be proud of.

'The governor, Chief T A Orji wants to make sure that if you come into Umuahia, you'd know that you're in a first class city, and therefore, government is trying to move the market. That market is in the centre of the city in Umuahia, it is actually an eyesore and unbefitting of a capital. So, that market is now being moved to somewhere closer to Uzoaku.

Looking at the slide as it rolled by, Megwara said 'A lot of you going to Aba know the old Ururuka Road - that road is now passable; it used to be a death trap. There is the old Express Road by Sam Eke - and that one has been abandoned for over 20 years, and the Government of Abia State picked it up, and that's how it looks like right now

'This is a federal road in Arochukwu. What is happening now in all the states, our own included, is that you wait for the Federal Government and they are not coming, and you know that your people are directly suffering from all the hardship that comes from deplorable road condition. The government of Abia State is doing that road. This is the new state secretariat. For the first time in the history of the state, the government has brought all its employees under one roof.

'The government has built 255 health centres located in the three senatorial districts of Abia State, to enable the people enjoy healthcare services.

The Nigerian Medical Association, the other day wanted to hold their annual convention, they were looking for a place. The International Conference Centre will make us able to attract international events. About 6,000 people would be able to sit comfortably in that hall when completed. Our governor has vowed to ensure it is ready before December.

'The diagnostic centre the governor has brought to our state has made it possible for our brothers and sisters who would be travelling to India, or Pakistan or Saudi Arabia to seek sophisticated healthcare. They are now being done in Abia State. We've just brought in the machines and brought the doctors too. This is the one in Umuahia, another one is in Aba. It took a lot to bring these things in', he explained among other things.

'What used to be an erratic power flow, a terrible power system in Abia State is now being corrected. We now have an Umuahia where you don't need a stabiliser any more to power your air conditioner, and can stay two, three days now without PHCN cutting your light. A lot of people thought it was PHCN but the Abia State Government put in N1.2 billion to assist PHCN in what we have in Umuahia and the surrounding area

- even if you're a vulcaniser, or a baker, or a hair dresser there's no need going to buy petrol to power the little I-better-pass-my-neighbour generator you've got; we've ensured steady power flow in Umuahia and its surrounding areas.

Each local government has a representation - the minimum is 300 in each local govt. Their basic is N15, 000 and then some of them are being assisted in skill acquisition centres in schools, universities, in learning a trade, agriculture, and in public works.

'Currently, there's a N1billion loan scheme that the state government has begun to processed for the youths and women in agriculture. The purpose is that those who qualify and want to invest in agriculture would get part of this fund to develop farms and all kinds of agro- processing to empower them.

'Regarding education, the governor has invested enormous sum in the education of our youths. You are well aware that Abia State University budget has been doubled. The secondary schools that are in Abia State, we are negotiating with the churches and charity organisations that established the schools ab initio, for the purpose of returning those schools to them.

We would also like to see the interest of old boys association and other Non-Governmental Organisations to engage in education. Somebody said that there were no teachers - that is a falsehood. On the roll, on the book and pay slip of Abia State there are enormous number of teachers, the problem is that many of them do not show up for work and all effort to change this attitude has failed.

That is why all over the nation today, government is moving in the direction of returning schools to their original proprietors and NGOs, because everybody's business is nobody's business. The people who teach in secondary schools, once you employ them in private schools they give 150% effort, but once they're are in government schools, in spite of all attempts to pay them adequately they give less than 50%.

The fact of the matter is that Abia State does not employ youth corps as teachers; Abia State is one of the educationally advantaged state, we have more than enough teachers. A place like Umuahia North Local Govt has a teacher/pupil ratio of 22/1, that is even better than England, but the truth is that most of those teachers are wives of big men and often doing other things and do not come to teach. So, the problem is not inadequate teachers.

In any case, the funds of government  are limited. Somebody came here and told you that Lagos State generates about N40 billion of taxes from you and I, and has allocation of another maybe N40 billion. Abia State has an allocation of N3 billion and has internally generated revenue of less than N400 million, because when you tax our people they say they're poor already, that they can hardly pay.

So, there are disparities in income flows, and I would like you to appreciate the circumstances under Gov. T. A. Orji is operating, and realise that the more people you ask him to employ the less he is able to invest in capital projects like building roads, building schools and health centres, because it is a trade off. If I have N100 the more I put in one sector the less I have to put in other sectors'.

Responding, Chief Ndukwe Iko, President-General, Ohafia Improvement Union, Lagos, thanked the organizers and encouraged them to come up with more of such programme. But then he also challenge the government to do more in opening up Abia North Senatorial District. He said the zone should not remain a 'zone to no where, the place should be opened up to connect other state', he said.

Chief Mrs Pleasure Ajuzie, the president of the Ohafia Women, Isolo also thanked the organizers and solicited for more support for the governor and what he is doing back home. She canvassed unity among Abians saying it is only when there is unity and peace that progress could be made.

Okpara in a brief interview with newsmen later said What you're seeing is a consequence of the liberation of Abia State. It is said that our governor does not believe in noise-making, which is true. People now took advantage of that and were writing falsehoods in the papers.

It is not a question of stories; it is a question of what you are seeing with your eyes (through the slide presentation). You don't expect everybody to say you have done 100% well; there would be objections, but if the citizens' perspectives are not sectionalised but based on issues, they would judge right.

Nobody is above mistakes; if they say you are not doing this one well why don't you do that, then the person who is doing it may say this is why I have done this. Where the criticisms are objective and logical they would be taken; nobody has a monopoly of wisdom.