Yar'Adua: We won't allow any bank to fail 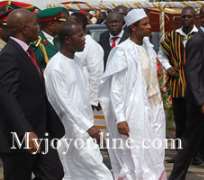 
Nigeria's presidency moved Sunday night to assure bank customers that their deposits are safe and secure with a firm promise that it would do everything possible to make sure no bank is distressed or allowed to go under.

Endorsing Friday's sack of five banks' chief executives by the Central Bank of Nigeria (CBN), President Umaru Musa Yar'Adua said the action would lead to the sanitisation of the nation's banking sector and prevent fresh bank failures “with their attendant negative effects on the national economy”.

The president has also nominated Dr. Kingsley Chiedu Moghalu and Mr. Stephen Oronsaye for confirmation by the Senate into the Board of the CBN.

A statement by the Special Adviser on Media and Publicity, Mr. Olusegun Adeniyi, said the president has also “assured all Nigerians that their deposits in Nigerian banks are safe as the Federal Government will continue to act in concert with the CBN to ensure that no bank is allowed to fail or become distressed”.

According to the statement, “The over N400 billion already injected into the five affected banks to ensure their continued viability affirms the Yar'Adua Administration's commitment to taking all necessary action to ensure the stability and well-being of the country's financial sector.

It said: “To strengthen the Apex bank further for the effective and efficient performance of its supervisory and regulatory functions, Yar'Adua has nominated Dr. Kingsley Chiedu Moghalu for confirmation by the Senate as a Deputy Governor of the CBN.”

Moghalu, 46, who holds a doctorate degree from the London School of Economics, has many years of experience in corporate governance, risk management and strategy. His appointment is expected to complement the collective strength of the CBN board and management.
Also, the statement said: “The President has approved the appointment of two additional members to the Board of the CBN. They are Mr. Stephen Oronsaye and Mr. Nebolisa Arah. Oronsaye, who is currently the Head of the Civil Service of the Federation, is to serve on the CBN board in his personal capacity and is to replace Prof. Akpan H. Ekpo (South-south Zone), while Arah, who was the pioneer Managing Director of Fidelity Bank, is to replace Mrs. Juliet Madubueze (South-east Zone).”

The appointments of Mr. Samuel Olofin, Dahiru Muhammad and Joshua O. Omuya to the CBN board have also been renewed by the president, the statement said.

All the board appointments are subject to confirmation by the Senate.

Meanwhile, the President has directed all law enforcement agencies to give their fullest support to efforts by the new management teams of the five banks which have received bailout funds from the CBN to recover the huge loans, the non-servicing of which placed the banks at risk of distress.