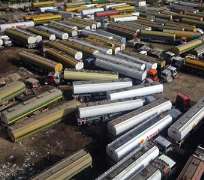 NATO said on Tuesday it had invited Pakistan to a summit in Chicago next week, lifting a veiled threat that it might exclude the country from the talks on the future of Afghanistan.

"Allies decided to invite President (Asif Ali) Zardari of Pakistan to Chicago to the meeting on Afghanistan," NATO spokeswoman Oana Lungescu said in a statement.

"This meeting will underline the strong commitment of the international community to the people of Afghanistan and to its future. Pakistan has an important role to play in that future."

NATO Secretary General Anders Fogh Rasmussen suggested on Friday that Pakistan could be excluded from the May 20-21 summit if it failed to reopen the supply routes to Afghanistan that it closed after 24 of its soldiers were killed by a NATO cross-border air attack last November.

Rasmussen noted that other countries providing supply routes to NATO had been invited to the summit, which will map out a future for Afghanistan after most foreign combat troops are withdrawn at the end of 2014.

President Zardari's spokesman said he was considering whether to attend the Chicago summit and that the invitation was "unconditional and not linked to the opening of ground lines of communication for NATO or to any other issue."

Pakistan has demanded a formal apology from the United States for the attack before it reopens the supply routes, and has also called for an end to U.S. drone strikes on its tribal areas bordering Afghanistan.

Pakistan boycotted an international conference on Afghanistan in Bonn in December in protest against the NATO air strikes.