'ACN NOT DISTURBED BY LADOJA'S ROMANCE WITH PDP' 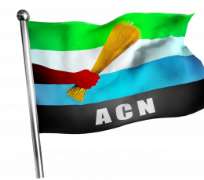 The South-west chapter of the Action Congress of Nigeria (ACN) has described as unfounded the insinuations that the party was jittery over move by former Oyo State governor, Rashidi Ladoja to return to the People Democratic Party (PDP).

Speaking with Daily Sun in Ibadan yesterday, the South-west Publicity Secretary of the party, Ayo Afolabi said: 'Our performance in governance in Oyo State just as in other states under our control has led to the defection of some PDP and Accord Party lawmakers to the ACN right on the floor of the House of Assembly.'

Afolabi pointed out that 'if our performance has portrayed us as a party that cannot win the confidence of the people in 2015, these lawmakers should have moved to a party they feel could carry the day in 2015.'

While stating that 2015 was still far away, Afolabi said: 'Our preoccupation now is how to intensify our efforts towards improving the living standards of our people in all its ramifications with resources at our disposal,' adding that 'it is the PDP's headache to spend their time and energy to look for a proverbial lost sheep.'

The ACN regional spokesman however assured that 'whenever Senator Rashidi Ladoja retraces his steps to the ACN, we will receive him very warmly because he is a good jolly fellow,' saying 'our party has conquered fear and has won the hearts of the people with superlative performance.' While revealing that his party's concern was how to spread dividends of democracy to all Nigerians as a central government in 2015, Afolabi said: 'We are going to add more states to the ones already in our possession and so, nobody should think of losing any them.'

H said: 'In Oyo State, just as in other states, both the PDP and its Accord Party counterpart are like two eye balls that can never constitute any burden to the head in a marathon race.' He therefore urged the people of the South-west and Nigerians in general to keep faith with ACN assuring that 'we will not let you down.'