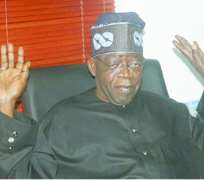 Tinubu
Former Head of State, Muhammadu Buhari's recent visit to the residence of former governor of Lagos State, Bola Ahmed Tinubu has again proved the saying that in politics, there are no permanent enemies but interest. General Buhari (rtd) visited Tinubu at his residence in Lagos, where they met behind closed doors. Since the visit, there had been all manner of permutations.

While Buhari was the presidential candidate of the Congress for Progressive Change (CPC) in 2011, Tinubu remains the undisputed leader of the nation's main opposition party, Action Congress of Nigeria (ACN).

The CPC made a historic mark in the last general elections but lost steam almost immediately. Now that PDP members who sought succour in CPC are retracing their steps, the party is engaged in a fresh design to retain the confidence of the grassroots and prepare for 2015 general elections.

Speculations are rife that Buhari and Tinubu discussed the future of the two leading opposition parties, especially how to restart consultations towards merger or alliance ahead of 2015. But the question is-can the two parties merge as that would demand more fundamental concessions which leaders of both parties appear reluctant to make due to peculiarities of both organizations? In appreciating the alliance, many issues are put in perspective here?

The trust factor
As the two power brokers (Tinubu and Buhari) make another attempt to lead the opposition parties against the Peoples Democratic Party (PDP), many welcome it with cynicism. Recall that this is not the first time the two musketeers would be working to battle the PDP but have always ended with no unity of purpose. It is like the saying that you cannot have two captains in a ship.

So, as the duo make another attempt to establish a formidable opposition, the question is-can Tinubu trust Buhari or vice versa? Many argue that what led to the failure of alliance between the CPC and ACN is the mutual suspicion and distrust between the two political gladiators. For Buhari, he is so obsessed with his toga of righteousness. He sees himself as the only candidate that can reposition Nigeria and his greatest undoing is not believing in the abilities of others.

According to sources, the alliance preceding 2007 election failed because of the rigid stance of Buhari on who should fly the presidential flag.

But one of the most contentious issues that led to the breakdown of talks, according to sources is the demand by the ACN to have the vice presidential slot in the alliance. Recall that Pastor of Later Rain Assembly Tunde Bakare was the vice president of the CPC in 2011. Also, report of the party's committee on the electoral alliance showed that the ACN gave other conditions to the CPC which included that the two parties should merge into a single party after the election.

The proposals which were produced by a three-man committee of the party, also demanded that the ACN should be supported to get the leadership of one of the chambers of the National Assembly.

But Buhari's position was that there should be no compromise on the issue of candidature. Many argue that both Buhari and Tinubu are strange bedfellows even though they share some similarities. While some see Buhari as an autocrat, others regard Tinubu as a monarch. ACN's divided house and CPC'S dwindling fortunes. Both parties are battling with internal challenges which are likely to affect the smooth running of the alliance. For the ACN, the situation in the party can be likened to peace in the graveyard. Critical observers reason that there is no internal democracy in ACN and it is only a matter of time before the bubble bursts. What nearly rocked the boat in the party in 2011 was the arbitrary imposition of candidates on members.

And just like the ACN, the CPC is also battling with a lot of challenges. Many see Buhari as the beginning and end of the CPC as he almost single-handedly formed the party barely six months to the 2011 general elections. When the CPC was formed, many Nigerians did not give it a chance to make any major impact in the political landscape. But one thing that marked out the party from the rest was its attachment to the personality of its founder and presidential candidate, Gen. Muhammadu Buhari.

The former military Head of State had before then been a member of the All Nigerian Peoples Party (ANPP), a party which offered him a platform on two occasions to run for the presidency. But his last experience with the ANPP was very devastating in that the party under the chairmanship of Chief Edwin Ume-Ezeoke frustrated all possible efforts by Buhari to upturn through judicial means the election results that pronounced late Umaru Musa Yar'Adua as the president.

The birth of the party was partly a fallout of the plan by some other parties and interest groups and individuals to form a broad-based opposition party capable of giving the PDP a run for its money in the 2011 elections. It was not surprising that Buhari also became the automatic presidential candidate of the party in the election.

But the party is also not without challenges as Buhari's overbearing influence just like the case in ACN has continued to threaten its unity. So, many argue that what may work against moves for a fresh alliance between the ACN and CPC is the crisis from lack of internal democracy in the two parties.

Sharing formula
In every alliance between or among parties, the major bottleneck is the modalities for sharing of political offices in the event of victory in elections. The major challenge is in the fact that the parties in such alliance do not usually have equal strengths.

In terms of states controlled by the two parties, whereas the ACN controls six states, the CPC has only Kebbi. So, with the disparity, it is obvious that the ACN is supposed to be the superior partner in the alliance. But whether that is possible considering the personality and character traits of Buhari is another thing. Many think that the CPC would again bargain for producing the presidential candidate in 2015 even though it is a junior partner.

PDP zoning formula
As the ruling party with an intimidating national spread, what happens in PDP would naturally affect the CPC and ANC alliance. The calculation is that if the PDP decides to zone the presidential seat to the North, it means that the future of the alliance would be in jeopardy. Analysts reason that the alliance can only produce result in the event that President Goodluck Jonathan who is of the South South zone decides to run in 2015. The implication of Jonathan running is that the northern power bloc of the country would feel more betrayed and may seek alternative platform to express their interest. If that happens, there is the likelihood that the alliance would benefit from the situation.

Buhari's toga of religious extremism
In this era of the Boko Haram religious sect, Nigerians may not be enthusiastic to enter into a relationship with anyone that has a tendency towards extremism. Though it is not proven but a reasonable percentage of the people believe that Buhari is so passionate about his Islamic faith and may not exercise enough tolerance when he is elected as the president of the nation.

So, many argue that the perception of Buhari as a religious extremist may still affect the CPC/ ANC alliance.