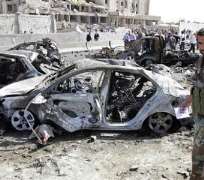 The bombings, the deadliest in the Syrian capital since the revolt began, further shredded a ceasefire which was declared by international mediator Kofi Annan on April 12, but which has failed to halt bloodshed pitting Assad's security forces against peaceful demonstrators and an array of armed insurgents.

Opposition leaders said Annan's peace plan was dead and that the government had systematically sabotaged it.

Syrian television blamed "terrorists" for the morning rush-hour blasts. It showed mangled, smoldering vehicles, some with charred remains of their occupants inside.

The near-simultaneous explosions hit the al-Qazaz district just before 8 a.m. (0500 GMT), residents said. One punched a crater three meters (10 feet) deep in the city's southern ring road. Bloodied corpses and body parts could be seen on the road.

State television also showed at least one overturned lorry. Walls of buildings on each side of the avenue had collapsed.

"This is yet another example of the suffering brought upon the people of Syria from acts of violence," said Major-General Robert Mood, leader of the U.N. monitors, who visited the scene.

The attacks occurred a day after a bomb blast near U.N. observers monitoring the ceasefire, which state forces and rebels have both violated, and two weeks after authorities said a suicide bomber killed at least nine people in Damascus.

DAILY KILLINGS
Opposition to Assad, which began with peaceful protests in March 2011, has grown increasingly militarized. U.N. Secretary-General Ban Ki-moon said on Wednesday there was only a narrow window of opportunity to avert full-scale civil war.

"There is no escaping the reality that we see every day," he said. "Innocent civilians dying, government troops and heavy armor in city streets, growing numbers of arrests and allegations of brutal torture, an alarming upsurge in the use of IEDs and other explosive devices throughout the country."

Rami Abdulrahman, head of the Syrian Observatory for Human Rights, said 849 people - 628 civilians and 221 soldiers, of whom 31 were defectors - had been killed since the April 12 truce. The toll did not include Thursday's deaths.

The British-based Observatory said a car bomb targeting an intelligence complex had caused at least one of the explosions.

One resident reported limited damage to the facade of the nearby Palestine Branch Military Intelligence centre, one of the most feared of more than 20 Syrian secret police agencies.

The Palestine Branch, a huge walled complex on the ring road, was the target of a car bomb in 2008 which killed 17 people and which authorities blamed on Islamist militants.

Shooting could be heard in the background of the Syrian television footage, filmed soon after the blasts. It showed a man pointing to the wreckage. "Is this freedom? This is the work of the Saudis," he said, referring to the Gulf state that has advocated arming rebels seeking to oust Assad.

"I am addressing Sheikh Hamad and I tell him shame on you. You are now destroying the Syrian people, not the Syrian regime. You are killing children going to school," she said.

Qatar condemned the blasts in Damascus and called on all sides to stop the bloodshed in Syria.

"DEAD END"
The United Nations says Syrian forces have killed more than 9,000 people in their crackdown on the protests. Syrian authorities blame foreign-backed Islamist militants for the violence, saying they have killed 2,600 soldiers and police.

Samir Nashar, a member of the opposition Syrian National Council's executive board, said the government had not implemented any part of Annan's six-point peace plan.

"We expect Kofi Annan to say that his plan has hit a dead end, and that the Syrian regime should be held responsible for not stopping its operations, the killings, and its use of heavy weapons," he told Reuters.

"We want international intervention to stop this policy of killing," he added, without saying what form this should take.

Nashar blamed the state for the bombings, saying they were intended to deter protesters and international monitors, an argument echoed by leaders of the rebel Free Syrian Army (FSA).

"The government is trying to make Kofi Annan's plan fail. These bombs are not the work of opposition fighters," said its chief, General Mustafa al-Sheikh, adding that the FSA lacked the capability to set off such big explosions.

Riad al-Asaad, the FSA's commander of operations, said the rebels were ready to resume attacks on government forces as soon as Annan announced that his initiative had failed.