LAGOS GOVT SHOULD BE PEOPLE-FRIENDLY - DOSUNMU 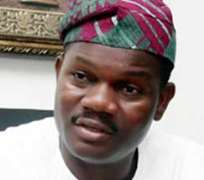 BY LAJA THOMAS
DR. Adewunmi Dosunmu was the candidate of the Peoples Democratic Party, PDP in the last gubernatorial election in Lagos State. Dosunmu was at one time, Director-General of the Nigerian Maritime and Safety Agency, NIMASA before his political advent. In this interview, he gives his appraisal of the present administration in Lagos State and other contemporary issues. Excerpts:

HOW would you appraise the present administration in Lagos?

Well, so far I still hold very strongly to some of the views I expressed during the electioneering campaign, particularly with regards to making the government, people friendly. Government is about the people and it is not about the people in government. That is what democracy is all about. As you will recall, the principle of democracy is about government of the people, by people and for the people and every political actor, particularly in the executive arm should remind themselves of this principle of democracy. You can not operate the system as if you are on your own.

It is only on that premise that you can adjudge whether the government of Lagos State has really done well or not and you need to go out there to make an assessment of the perception of the majority to know how well have they impacted positively by the various government programmes.

For instance, Lagos State University (LASU) was established to make education affordable to Lagosians; at a point the university was virtually operating free but because of the cost of administration and what have you, they introduced fees and the fees got to a point of about N25,000 or N30,000 before the present Lagos State government increased it to between N190,000 to N350,000.

Ade Dosunmu
That is the most expensive public university in this country and when you do the rating of best universities, I am not sure it ranks amongst the best. So what can be responsible for that and how many Lagosians can afford to send their children to LASU? You can now see that we are beginning to feel the negative effect of that policy.  At the last admission in LASU, about 4,900 people were admitted but only about 1,800 matriculated. I am predicting and saying it with all sense of responsibility that in the next admission, LASU will not even have up to 500 people that will choose the university.

The issue of tollgate in Lekki, is also one area that I feel the government  has not really taken into consideration, the plight of the masses of the people of Lagos state. I want to tell you, that that is the most expensive tollgate I am seeing anywhere in the world. Don't forget that, that is an intra-city road; it is not even inter. That tollgate, cuts across Lekki, Eti-Osa local government , Ibeju, Lekki and Epe. So people living within that axis, have to pay in and out of their residence and these people are Lagosians, who are also paying taxes to the government. And when you pay tax to government, there are certain things that you expect.

The Lagos state government is at loggerheads with the Medical doctors. How do you think this impasse can be resolved.

I remember last year they were on strike for some months and one would have expected that government  by now, should have resolved what ever the issues are. But I am surprised that up till now, they are still talking about the same issues. that they went on strike for last year. Is it that somebody is  not doing anything or is it that the problems, defies all solutions or what because  I can not just understand why it has to be Lagos State doctors,  every time going on strike. It is very, very sad.

The House of Representatives ad-hoc committee  recently revealed the alarming fraud perpetrated in the name of fuel subsidy. What is your take on this report?

The government has taken a bold step by even allowing the probe in the first place. That act has clearly shown that the federal government is up and doing in ensuring the system is rid of corruption. We all know what we went through during the fuel subsidy protest and the protest remains the longest strike the country experienced in recent times. I believe the government is going to do something about it, to ensure that the system is cleansed of corruption and that such abuses do not repeat itself again.

The Action Congress of Nigeria recently labeled the recent PDP convention as undemocratic. Do you agree?

Well, I don't know what they mean by undemocratic, because consensus is part of democracy as far as I'm concerned. How many of the opposition parties have held this type of convention that PDP held? In ACN, what they do is anointment and imposition. A candidate will just be anointed and everybody will go and adopt.

PDP as the largest party in Africa has gone beyond the expectation of the opposition parties. They were waiting for a convention that will be rancorous, that will lead to crisis; so most of them were disappointed that PDP despite its size, can manage itself.