THE FRENCH PRESIDENT AS A NIGERIAN 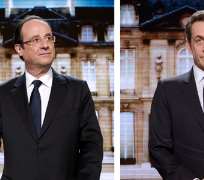 The ripples generated by the spectacular outcome of the French presidential election have, admiringly, reverberated far beyond its boundaries. Expectedly, Nigerians - and followers of international politics – have been waxing eloquent about the calamitous ouster of the incumbent French president, Nicolas Sarkozy, and the concomitant, heroic ascendancy of the his socialist-oriented challenger, Fancois Hollande.

Indeed, I can almost reasonably conjecture that in the coming days and weeks, a sizable assemblage of African Presidents and Heads of State – including our own dear Jonathan – will be falling over themselves to ventilate their solidarity and register their identification with the new French president. Ironically, this pack will also include those African leaders whose democratic credentials are appallingly watery and cobwebby; leaders whose autocratic propensities have remained unquestionably horrendous.

Unanimously, they will be inclined to celebrate the French election as an inspiring watershed; some will hurriedly orchestrate the immediate passage of a supplementary budget to cater for the cost of their countries’ full representation at the swearing-in ceremony of the new French president; most will hasten to remind the new French leader of his country’s legendary obligation to spoon-feed tottering African nations with more foreign aid, foreign loans, foreign investments, French technical assistance, etc.

Yet, in spite of such frenetic display of sanctimonious gyrations regarding the French election, how do we, as a people, ensure that the significance of that election is not lost on all of us? What salient lessons can we learn from the French example?

First, the French election reveals the enormous possibilities of a society where democracy has a meaning; where the electoral wishes and preferences of the people are sacrosanct; a society where political choices are defined and contextualized by robust ideas and clearly defined philosophical paradigms.

Imagine if the French election were to have been conducted in a bigoted enclave like Nigeria; the outcome, by now, would have been a dialectical negation of the French experience. Most assuredly, the outgoing president, Nicolas Sarkozy, would have activated and effectively deployed all the paraphernalia of political incumbency – including the privatization of the Police, Army and electoral officials – to guarantee his landslide re-election.

Even before the election proper, the supporters of Nigeria’s “Sarkozy” would have taken up the cudgels in defence of their candidate’s divine right to second term. They would have argued that Sarkozy’s predecessors from other “tribes” had enjoyed uninterrupted eight-year tenures and that “hell will be let loose” should anything happen to their principal or jeopardize his re-election bid. Above all, these neurotic supporters of Nigeria’s “Sarkozy” would have threatened that “even if the rest of Nigerians conspired not to vote for their candidate, God would determinedly raise ‘stones’ to vote him back to power (a phrase symbolizing a disguised euphemism for rigging).

What about those on the other side of the divide? They would readily brandish the talismanic doctrine of “zoning” and “Federal Character.” They would have pleaded marginalization and then proceeded to back it up with the threat to render the country ungovernable if “power” did not revert with immediacy to the oligarchic epicentre where it naturally belongs. And guess what would have become the end result: Boko Haram!!!

By the time the result of the election is finally announced and Nigeria’s “Sarkozy” is declared the winner, it would imply that our trouble as a country has only just begun. The electoral victory of Nigeria’s “Sarkozy” would have been so commanding – indeed, utterly crushing – that even General Buhari would not be spared the mishap of loosing in his native hamlet. By now, the ACN’s spokesperson - Lai Mohammed, and his CPC’s counterpart – Rotimi Fashakin, would be screaming like desolate voices in the wilderness; they would be shouting “blue murder” and accusing Sarkozy’s party of rigging them into a terrible stupor!

What about our lawyers? You can always trust some of them to fish in troubled waters even if it means holding a candle to the devil. The Senior Advocates in their fold would meticulously dust off their certificates of SANship in anticipation of the impending “glorious windfall.” A few of them would even go to the extreme of exchanging “learned” punches in their scramble for hefty clients.

Worse, even those contestants and political parties whose presence is so embryonic and whose political activism is decidedly negligible (that they could hardly secure any votes beyond the number of their immediate biological family members) would all crowd the electoral tribunals and the courts, not because they have any case to prove, but because of their abiding faith in the possibility of “judicial miracle,” – a tendency that is reinforced by the decadence and corruptibility of the country’s judicial system.

Effectively, what began as a democratic contest now graduates and acquires the character of an intense judicial combat amid the growing undercurrents of insidious intrigues, bellicose animosity and crass miscarriage of justice. At the end, the entire lifespan of a particular political tenure would be dedicated to the struggle for political survival and the consolidation of power to the utter detriment of everything else including development.

It bears repeating that democracy thrives on the basis of ideological contests on how best to proceed with societal transformation. By the same token, democracy is gravely endangered when a people’s idea of social transformation is infected by the pettiness of ethnic bigotry, religious chauvinism and other parochial considerations.

One of the patent absurdities of Nigeria’s flirtation with democracy is the tendency of its people to reduce the issues of elections to the crude mechanics of tribal turn-by-turn settlement. The painful, inescapable consequence of such obscurantism is that it has created a situation where the worst elements amongst us emerge to rule over our best minds.

By embracing the barbarity of ethnocentricism and religious sentimentalism, we have obstructed our march to contemporary civilization and have inevitably – but unwittingly – entrenched a culture of polarized ethnicities and “informal political groups” perennially engaged in a war of attrition over the control of the power and resources of the Nigerian state.

Worst of all, we have provided a powerful and irresistible incentive for corruption by propagating the belief that the centre is accountable to nobody but answerable to whatever group that succeeds in hijacking the state and appropriating its powers in the service of private interests.

Again, I ask: if Nicolas Sarkozy were to be a Nigerian, would he become so “politically bereaved” as he presently is in his home country France? I suspect that the ever-dependable machinery of the “largest political party in Africa” would have spared him the embarrassment of a run-off election and delivered him from the cataclysm of electoral defeat.