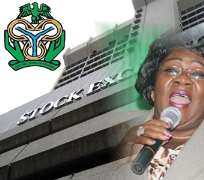 Accusations and counter accusations that have defined the ongoing investigation of the Federal House of Representatives Ad hoc Committee into the ruinous state of the Capital Market continued on Tuesday, with former director-general of the

Nigerian Stock Exchange (NSE), Prof. Ndidi Okereke-Onyuike branding the intervention of the Security and Exchange Commission (SEC) in the affairs of the NSE since 2009 as a plot to cover up its illegalities.

Testifying before the committee, Okereke-Onyuike described as frivolous, allegations of mismanaging about N1 trillion levied against her by the director-general of SEC, Ms. Arumah Oteh.

She stated that SEC has no powers to dictate how a private company like the NSE spends its money, and condemned unguided pronouncements by regulatory authorities, saying their actions contributed to the eventual crash of the capital market. She also faulted the nationalisation of Afribank, Bank PHB and Spring Bank by the Asset Management Corporation of Nigerian (AMCON).

“SEC has no business over how a private company spends its money. NSE is not a profit-making entity but it makes its money from fee paid by stock brokers for its services, which was 0.6 per cent before it was reviewed downward in 2006 to 0.3 per cent following the boom in capital market,” Okereke-Onyuike said.

“As at 2006 when the market was booming, I implored the Council to review the fees to 0.3 because we were making too much money and we had no place to put the surplus. So, before I was forced out, the Nigerian stock exchange market was healthy and vibrant.”

Arguing that her ouster was to prevent her from overseeing the demutualisation process, she said, “SEC had no problem with our succession plan but all they were saying was to cover up their illegality of taking over the NSE. For instance, in 2008, SEC gave us a clean bill of health after the inspection of our books and operations.

“I want to say that there is no law backing the decision of SEC to take over NSE; it was all orchestrated on the excuse that the transition programme put in place by the Council was not transparent. I want to say that we informed SEC about it and they gave no objection. What they said was that they would have preferred that it was thrown open. However, what we did was in line with what our founding fathers did by grooming insiders that have the experience to take over.

She also berated the Central bank of Nigeria (CBN) and the Nigeria Deposit Insurance Corporation (NDIC) for their roles in the collapse of the capital market, saying, “Regulatory pronouncements and actions were the major factors that led to the crash of the market because those pronouncements hurt. Yes, there were some banks that did some things wrong but there are certain aspects of business that, even if something was found to have gone wrong, should not be for public consumption until you have proven it beyond reasonable doubts and you want to punish the culprits.

“So a regulator does not just make wild pronouncements and accusations because it hurts the system. If you say all the banks are criminals, how would anyone want to go and put their money there? Same way, nobody would want to go to the stock market when you say the engine room of the Stock Exchange is about to collapse.

“We, in the stock exchange, punish stock brokers when we judge stock brokers and clients by sending them on suspension such that they cannot trade for a specified number of days depending on the magnitude of their offence. But we don’t make public pronouncements of that unless it is a serious infraction that can negatively impact the market.

“So for the CBN to call the capital market ‘kalokalo,’ I would have come out to make a statement because you cannot call me a thief and expect me to keep quiet. I am not a thief and the stock market is not a kalokalo but a place [where] people make informed decisions because it is information-driven. That is a grave statement.”

Faulting the nationalisation of some banks by the CBN, Okereke-Onyuike wondered how assets of citizens could be nationalised.

“Are we not Nigerians?” she queried. “Even if the person is a criminal, you go to court and prove that he is a criminal then you take the assets.”

Continuing, she said, “The CBN did not give the shareholders a fair hearing; they were not given any chance at all. The CBN and the NDIC were telling directors and managers of the banks to recapitalise; nobody called the shareholders to an Annual General Meeting (AGM). If SEC had made a pronouncement to say, ‘CBN you can take over the banks but do not nationalise them by following the delisting rules and methods of the stock exchange...

“It is wrong to seize a quoted company. The reason people buy quoted company instead of private quoted is because of safe investment. Even as you are protecting the depositor, the investor should also be protected by calling an AGM to inform them of the need to increase their share capital.

“Even if you know that they cannot meet up with the recapitalisation, you would have given them a chance and it would have felt better; then you can now follow the delisting rule set by SEC.”

On her role in the formation of Trans National Corporation of Nigeria (Transcorp), Okereke-Onyuike said it was a national duty that was duly approved by the Council of the NSE.

She explained that former president, Olusegun Obasanjo co-opted her into the interim board of the Corporation on the strength of her expertise.

“Former President Obasanjo wanted Nigeria to be like the Asian Tigers and asked me to rally a group of Nigerians that could make it work; [he wanted] a company that every Nigerian could buy into,” she disclosed.

“I told him that I could not be in the group because I headed the NSE and since some of those people were in the Exchange as well and I would have to make decisions on quoted companies, there would be conflict of interest. He insisted and wrote to the Council, and the Council agreed that it was a national duty. I, however, made it clear that I would step down after the company might have taken off on a sure footing.

In the continuation of the probe tomorrow, SEC DG, Oteh is scheduled to appear before the Committee on Wednesday.