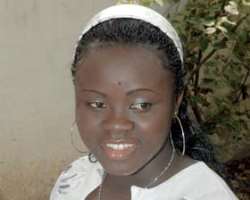 Ghana's young, beautiful and innovative gospel music star, Cynthia Appiah Kubi aka Cee, has hinted that although she is a woman who will one day marry, she is not ready to marry now.

She explained that she has a lot of projects ahead of her, and so marriage is currently on hold, adding, “Hmm, marriage? Not yet”.

Speaking to BEATWAVES after her live musical performance at the El-Wak Stadium last Saturday as part of activities marking Peace FM's 10th anniversary, Cee whose performance won the hearts of all music fans also denied rumours that she would soon be engaged.

“It is not true that I am going to be engaged soon. Who told you I will soon get married? It is not true. I have so many things to do as a gospel musician and in order to achieve my dream, I have to remain focused in my chosen career before anything else”.

When asked whether she has somebody in mind to marry in future, Cee replied in the negative.

Cee of TV3 Mentor fame has been in the music industry for some years now, and is very happy that she is gradually climbing that ladder to make her dream a reality.