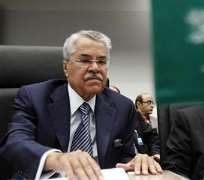 Worries of a supply disruption from the Middle East due to escalating tensions between the West and Iran over Tehran's disputed nuclear program have pushed Brent prices 20 percent higher since the start of the year to a record of over $128 in March.

Prices have since eased but the more expensive crude has threatened to derail the fragile global economic recovery and strained the budgets of emerging economies. This has prompted influential Saudi Arabia, a key ally of the United States, to repeatedly stress that oil markets are well supplied.

Despite the recent declines, Naimi told reporters during a trip to Japan that oil prices were still high. Asked if producer group OPEC needed to raise output quotas in a policy meeting on June 14, he said: "You have to wait for the meeting. We have to discuss that."

At 10 million bpd, Saudi Arabia's output is the same as last month, which was the most since November when it produced more than it had done for decades.

The kingdom stood ready to tap into its spare capacity of 2.5 million barrels per day if more crude was needed, he added.

"In addition to our spare capacity of 2.5 million barrels per day, we have on the ground, in tanks and in pipelines, about 80 million barrels of inventory. These are working inventory," Naimi said.

Saudi Arabia had storage capacity of about 80 million barrels, which was full, and was ready to meet any sudden need for an increase in supply, he added.

Iran's oil exports have been reduced by Western sanctions aimed at forcing Tehran to halt its nuclear program.

China, South Korea, Japan and India, the main buyers of Iran's 2.2 million bpd of exports, have all made cuts in purchases this year and rising supplies from Saudi Arabia, Libya, Russia and other Middle Eastern exporters are helping ensure there is ample crude available.

JAPAN SEEKS STABLE SUPPLY
Naimi told Japanese Trade Minister Yukio Edano that Japan was an important consumer and customer, and that he understood the country's oil needs had increased following the Fukushima nuclear disaster, according to a METI official who briefed reporters on the meeting.

The last of Japan's nuclear reactors was idled on Saturday with no schedule for restarts because of concerns about safety.

Naimi said Japan could rely on Saudi Arabia for stable oil supplies. But the METI official said that no specific country was mentioned when reporters asked if Saudi Arabia would step in to fill the shortfall from Iran.

"This offer of supply from Saudi Arabia is not to offset a particular nation's decline in exports to Japan," the official said. "There was no such exchange."

Japan's crude imports from Iran fell 36.4 percent in March from a year earlier, while overall oil consumption has risen to meet power demand with nuclear generators switched off.

"In general, Saudi Arabia has provided the greatest cooperation over many years in regards to a stable crude oil supply," Edano said. "I want to thank them for that and ask for continued cooperation."