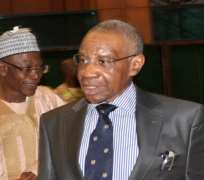 UYO, May 07, (THEWILL) - Judicial officers in the country must adhere to requisite ethical principles and eschew all forms of corruption if the judicial system will improve on its credibility, Chief Justice of Nigeria (CJN), Justice Dahiru Musdapher has said.

The Chief Judge made the call on Monday at the opening of the National Convention and Delegates’ Conference of the Magistrates’ Association of Nigeria in Uyo, Akwa Ibom State. He warned of the implication of public loss of confidence in the Judiciary.

As the bridge between law and society and as custodians of the values of the constitution, he implored judicial officers to act with the highest standard of care and fulfill their judicial roles without fear or favour, affection or ill-will.

“I urge all magistrates to take reasonable steps in maintaining and enhancing their knowledge, skills and personal qualities, taking advantage of continuing professional programmes and other facilities to the extent possible,” he advised.

Musdapher, represented by the Chief Judge of Akwa Ibom State, Justice Idongesit Ntem-isua, further cautioned that it was unacceptable to spend inordinate length of time on the determination of suits.

He said the reform he has been initiating since assuming office is aimed at building a justice system that is simple, fast and efficient. “As Magistrates, we must not fail to be in charge of our courts despite the antics of some layers to delay proceedings,” he added.

Musdapher observed with dismay that the work of the Judiciary had been impeded by underfunding, especially at the state level.

According to him, majority of the state governors have refused or neglected to give effect to section 121 (3) of the Constitution of the Federal Republic of Nigeria, 1999 (as amended), which crystallises the institutional independence of the Judiciary. He urged state governors to give effect to the said provision without further delay as a validation of their belief in the rule of law,

He lamented the inadequate remuneration of magistrates, which he termed another serious challenge, as it negatively affects the potentials of the magistracy to successfully fulfill its important roles.

“I call on all stakeholders to forge a concerted front to better the conditions of work at the Magistrate Court level so as to make it attractive enough to draw and retain the best minds,” he said.

“Some of the greatest legal minds that have graced the Supreme Court Bench rose from the Magistrate Bench and, undoubtedly, it remains a foundry for grooming future judges of the Supreme Courts. We cannot afford to neglect them.”

National President of the Magistrates’ Association of Nigeria (MAN), His Worship Bulus N. Nyiputen said the essence of the national convention was to celebrate 40 years of MAN’s existence.

Reflecting on the theme of the convention, MAN At 40: The Role of Magistrates in the Enhancement and Advancement of Justice Delivery in Nigeria, Nyiputen said the convention would be to assess and evaluate the achievements of the body and proffer the best way going forward.