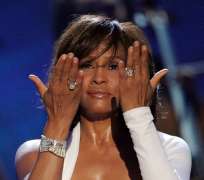 Shortly after her funeral, an armed guard was temporarily hired to patrol Whitney Houston's grave in case robbers should target the £300,000 (or $500,000) worth of jewellery she was buried with.

However it seems the threat of grave-robbers is still very real as the late singer's family have now requested security guards to keep watch over Whitney's resting place on a more permanent level.

A guard was seen patrolling the site at the Fairview Cemetery in Westfield, New Jersey