GOV. FASHOLA & MIMIKO'S POLITICS ON LIFE AND DEATH: A TALE FROM TWO STATES 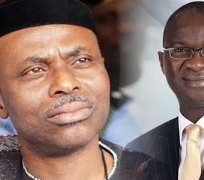 In as much as I have tried to refrain from commenting on some partisan issues, particularly when such relate to life and death, I cannot however restrict myself, even in the face of being called names from urging Governor Raji Fashola of Lagos to take pragmatic, bold and urgent steps in ending the imbroglio between his government and his doctors.

I was in Lagos to represent a client, at the Federal High Court, Ikoyi and despite the nature of the case which involved a well known statesman’s family and an equally wealthy and famous family as well as the estate of a late media mogul, the highlight of my trip to Lagos is not about the case in court with its attendant press reports but the doctors' strike and its tolls on Lagosians.

I am appalled by the reported deaths in the state and one is therefore not surprised that despite the Governor’s and his acclaimed leader, Alhaji Bola Ahmed Tinubu’s grip on the state, the people of the state set aside their love for the governor and cried out yesterday to his office in Alausa to protest the strike by doctors in the employment of the State.

It was also reported that the Speaker of the House of Assembly was held hostage for a while to impressed to the power that be the need to addressed the doctors’ once and for all.

The protesters stormed the governor’s office with placards bearing inscriptions like, ‘Government and doctors please embrace dialogue;’ ‘Lagos doctors stop the killings;’ and ‘Fear God, stop strike,’ among others.

The spokespersons for the protesters, Bola Popoola and Sesan Sowande, appealed to Fashola to resolve the crisis to prevent further loss of lives.

“Many deaths are being recorded on a daily basis and the sick among us cannot receive medical attention,” Sowande said.

He urged the doctors not to use salary issue to destabilize the health sector in the state. Popoola noted that the strike would rubbish the effort of the government in the health sector, saying that doctors who refused to yield to public plea to return to work should be sacked.

Responding, Governor Fashola appealed for calm, saying a lasting solution to the problem was in sight.

“Let me apologise to all Lagosians suffering from this situation that we find ourselves, Fashola said. “Since 2002, the government has been working to improve conditions in which doctors and nurses operate in the hospitals, theatre clinics and even the school of nursing.

“Hospitals don’t save lives and all of what we have done is with your taxes and I assure you that we will end this strike soon.”

To say the obvious, Governor Raji Fashola, Senior Advocate of Nigeria is a man after my heart, despite our party difference; he remains the pride of my noble profession and an indicator and promoter of the saying that "lawyers do it better".

Raji Fashola is rounding up his second and last four years term as Governor of Lagos State and has taken some decisions which, to my humble-self have made his profile rise, while to some, his second coming to rule the state has only indicated a detour in the area of developing the state as reflected in these two policy decisions; the controversy surrounding the collection of tolls on the Lekki-Epe Expressway and the hike in school fees of students of the Lagos State University, LASU.

My immediate concern today is not on the actions or the omissions of Governor Raji Fashola of our centre of excellence but on the politics of life and death playing out in Lagos as it is imperative that the issue of doctors strike in Lagos is addressed to the relief of all, how this is to be done is not my concern either but the need to stop the technical and inattention conspiracy against the common people of the State.

Any price is not to much to save life, as this is one of the major provisions of the Nigerian 1999 Constitution, Section 33 of the constitution made a proviso to the effect that every Nigerian citizen are entitled to the "Right to life", can we then say that this provision is being violated, abused and brutalized? What then is the importance of the evidence of the constitution which is the guideline for a democratically elected government?

The Governor of Lagos State must ensure that the striking doctors in the state return to work and stop insisting that their demands were “simply impossible” as lives lost cannot be replaced even with all the security votes at his disposal.

What can be of more importance to a government that has the welfare of the citizenry at heart, than the protection of lives? This is a question that the Fashola and his cabinet members need to ask themselves.

And no pun intended in the followings; if the governor of Lagos State is at loss of what to do, in getting the striking doctors back to work, I do not see anything wrong in Raji Fashola calling his friend and counterpart in Ondo State, Olusegun Mimiko, a medical doctor who had made a covenant to ensure a first class medical service to all, regardless of class and status in Ondo state.

Despite litanies of strikes in our polity, it is to Dr. Mimiko’s adulation that the State has not recorded any Doctors’ strike since his coming as Governor of Ondo State.

In concluding this note, I noticed something that should be of concern to Governor Raji Fashola and those that have interest of Lagos State at heart in one of Nigerian leading Newspaper last week, on the front page was a picture of pregnant women in Lagos state on their kneels wailing and begging the Lagos State government and striking doctors to save their soul, inside the same newspaper publication was another picture of some pregnant women from Ondo State dancing with the State First Lady, Olukemi Mimiko, thanking the Ondo State government for providing good medical service for them. What an irony? What a tale from two states.

The Lagos state government should not overlook this scenario as it is a pathetic sight to behold and it is a slap on the Fashola Government despite the achievements that has been received since the inception of this administration. And Fashola will not be standing alone for consulting his friend in Ondo State as Petter Obi the Rock of Anambra State and Taliban Babangida Aliyu of Niger State had publicly made it known that they learn from Mimiko.

The Lagos State Government should make efforts in paying attention as regards the welfare of its citizen as this is of utmost importance because there is no achievement that can be made in this state that can be fully recognized if the people who are to enjoy it are not in good health condition.

Also, the Doctors shouldn't be hasty in making their decisions as the pros and cons should be considered...the doctors need to realize that as much as they are fighting for their own interests, the interest of the masses are being trampled on which shouldn't be so....they need to realize as the saying goes "where two elephants are fighting, it is the grass that suffers the consequences". Thus, the doctors should imbibe more the culture of dialogue than strike.