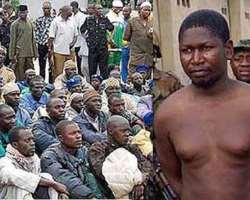 Mallam Mohammed Yusuf on his capture and shortly before his death.
Listen to article


By Joseph Ushigiale and Segun Awofadeji in Bauchi

Lagos — The emergent leader of the controversial Boko Haram religious sect, Sanni Umaru has vowed to continue waging a religious war "in Nigeria which no force on earth can stop."

Umaru, in an e-mail sent to newsrooms, said his group's aim "is to Islamise Nigeria and ensure the rule of the majority Muslims in the country," adding that "we will teach Nigeria a lesson, a very bitter one."

But speaking at a news conference in Lagos Friday, Nobel laureate, Prof. Wole Soyinka has described the current effort by the federal government to address the Boko Haram uprising in some states in the North as "a flight into escapism."

Soyinka explained that until the core issues bordering on "corruption, inequality, social injustices and the lack of educational opportunities, religious intolerance and arrogant claim to interdict the dissemination of religious beliefs in some part of the country are addressed," Boko Haram would continue to be a recurring event in the polity.

In the statement, "We Speak as Boko Haram", Umaru outlined a six-point agenda which he said the sect is ready to unleash on both the Northern and Southern parts of the country beginning this month.

According to him: "from the Month of August, we shall carry out series of bombing in Southern and Northern Nigerian cities, beginning with Lagos, Ibadan, Enugu and Port Harcourt. The bombing will not stop until Sharia and Western Civilisation is wiped off from Nigeria. We will not stop until these evil cities are turned into ashes."

Umaru said the killing of their leader, Mohammed Yusuf, "in a callous, wicked and malicious manner will not in any way deter us. They have lost their lives in the struggle for Allah."

According to him "Boko Haram lost over 1000 of our martyr members killed by the wicked Nigerian army and police mostly of Southern Nigeria extraction; that the Southern states, especially the infidel Yoruba, Igbo and Ijaw infidels will be our immediate target."

Meanwhile recent statistics released by the Bauchi State Police command reveal that death toll in the recent religious disturbance in the state has risen to 52. Spokesman of the State Police Command, ASP Muhammad Barau, confirmed that the number of the sect's members killed during last month's clash with the police in Bauchi metropolis has risen to 52.

Police had earlier announced that 39 people were killed in the clash which erupted when members of the sect attacked a police station in the state capital on a Sunday morning. The crisis was to later spread to other neighboring states of Borno, Yobe and Kano.

He said the victims were given mass burial to prevent the possible outbreak of an epidemic after their families failed to come forward to claim their bodies for burial.

"Boko Haram actually means 'Western Civilisation is forbidden.' The difference is that while the first gives the impression that we are opposed to formal education coming from the West, that is Europe, which is not true, the second affirms our belief in the supremacy of Islamic culture (not Education), for culture is broader, it includes education but not determined by Western Education."

Soyinka who spoke during an interactive session with newsmen in Lagos said he was "worried by some satanic language which tend to lull society into a sense of insecurity," adding that "Boko Haram and other ambiguities of anti-humanistic offences are a grab-back of other anomalies of the realism of our existence."

Citing serveral cases of religious crises mostly in the North that culminated in scores of deaths, Soyinka noted that "in all these incidents both government and the citizenry had exhibited complacency in the matter of extra-judicial killings".

The Nobel Laureate stated that "I abhor all forms of extra-judicial killings and there is no evidence of a rigorous attempt by government to pursue the killers and everyone went to sleep and these again went unchallenged. So these are the root causes of Boko Haram where language of appeasement has been used to encourage it or these things are happening with government's tacit support."