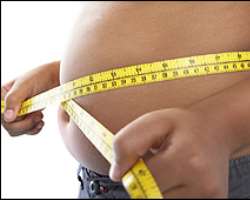 WASHINGTON – Scan the breathless headlines at any magazine rack — Fight Flab in Minutes! Get Beach Ready! Add the skinny yet buxom model, and it should be no surprise that the average woman feels insecure if not downright unhappy with her real-world figure.

Hang on: Are we worried just about appearance, or about whether our size signals a health problem?

There's a big disconnect between body image and true physical condition, an Associated Press-iVillage poll suggests. A lot of women say they're dieting despite somehow avoiding healthy fruits and veggies. Many others think they're fat when they're not.

She points to women athletes as much better role models than supermodels: "There's an undervaluing of physical fitness and an overvaluing of absolute weight and appearance for women in our culture."

About 60 percent of Americans are overweight or obese. The AP-iVillage poll of 1,000 adult women mirrors the government's count on that. More surprising, perhaps, are women's attitudes and actions.

Half don't like their weight, even 26 percent of those whose body mass index or BMI — a measure of weight for height — is in the normal range. But just a third don't like their physical condition, even though being overweight and sedentary are big risk factors for Type 2 diabetes, heart disease and other ailments.

Time is a big barrier.
"I was a fanatic about exercise when I was younger, and I quit focusing on that when I had kids," says Laura Comer, 45, of Sugar Land, Texas, a mother of two.

But she just her lost her job as a hospital system vice president and is using the new free time to ease in more activity. First up: walking 10,000 steps a day.

Vesna Stemwell, 51, of Delano, Minn., has a sedentary job — she's a computer programmer — with lots of overtime and a 45-minute commute.

Temporarily giving up meat and dairy products for a religious observance helped her drop five pounds, so she's considering becoming vegetarian to drop more. But her husband isn't keen about a menu change.

"Changing the diet," Stemwell said, "affects everybody in the house and it's hard to have something different."

About a quarter of the women surveyed said they'd consider plastic surgery to feel more beautiful. Their overwhelming choice: a tummy tuck.

A tummy tuck is cosmetic, removing just some surface fat, and a far cry from more radical surgeries like stomach stapling that are reserved to help the health of the very obese.

"People can't see the damage that's being done inside their body," says Goldberg. "If you increase your fitness but don't lose as much weight, you still have a lower heart disease risk than someone who is obese and sedentary."

At the other end of the spectrum, the poll found 16 percent of normal-weight women who nonetheless are dieting to drop pounds. Most extreme are eating disorders like the anorexia that has tormented Daleen Johnson of Oceanside, Calif., for years.

Her two children spurred the 5-foot-9 Johnson to put on 20 pounds in the past year, getting up to 125.

"My 8-year-old came up to me and was like, 'Mom, why don't my hip bones stick out like yours?'" said Johnson, 28. "I could put my selfishness aside so that she didn't think being skinny is what matters."

Still, Johnson says, "Summer's coming and I'm panicking because I don't think that I'm good enough. I don't look like the supermodel on TV."

"Someone who is fat or even overweight can be healthy if they have a balanced diet and are physically active," Kwan says. "Our culture really does put a lot of pressure on women to look a certain way," taking precedence over health measures.

Olive James, 60, of Cincinnati gets that message. She calls herself about 10 pounds over her target weight, but exercises 30 minutes a day and takes her cholesterol and blood pressure medicine.

"I do get a lot of compliments for the way I carry myself," she says. "I feel great."

The AP-iVillage poll was conducted April 20-30 by Knowledge Networks, which contacted survey participants using traditional telephone and mail polling methods but then intensively questioned them online, providing Internet access for those who needed it. The poll has a margin of error of plus or minus 3.7 percentage points.