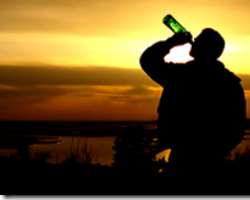 Drinking up to half a glass of wine per day can help you live up to five years longer — at least for men, according to a study published on Thursday.

The impact also depends on the exact amount drunk — more than half a glass starts bringing life expectancy down again, according to researchers from Wageningen University in the Netherlands.

"Drinking wine was strongly associated with a lower risk of dying from coronary heart disease, cerebrovascular disease, and death from all causes," said the study.

The drink of choice
Effects varied, however: men who drink up to 20 grams of any type of alcohol per day live for about two years longer than non-drinkers, while the length of time is slightly lesser for those drinking more than 20 grams.

The study, published in the Journal of Epidemiology and Community Health, was based on research on some 1373 men between 1960 and 2000. It did not draw conclusions for women.

They also tracked weight and diet and whether the men smoked.

The results held true regardless of socio-economic status, diet or lifestyle, it found.

One finding which might seem surprising: the proportion of men drinking alcohol nearly doubled over the four decdes, from 45 percent in 1960 to 86 percent in 2000.

The proportion of those drinking wine skyrocketed, from two percent to 44 percent over the period.