AZAZI WERE YOU USING EMOTIONS TO PROVOKE PRESIDENT JONATHAN'S RESIGNATION? 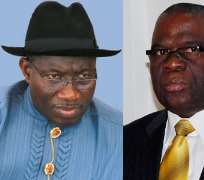 The first principled truth is that at this time in Nigeria life is frustrating and painful considering the current level of insecurity in the nation.

There is one Nigerian, apart from the nation’s President, Dr. Goodluck Jonathan, who really knows the depth and density of insecurity in the country, he is the President’s current national security adviser and his name is Owoye Andrew Azazi, a retired general and a former chief of defense staff.

In truth and in pain, and from the point of speculative or theoretic psychology, Azazi was waiting for that very Friday and that week end to reveal his repressed anger, feelings of shame and guilt about a dwindling nation, and find a way to turn all of his frustrations not against himself, at least not this time but towards the nation as a whole especially those in political leadership, the President apparently.

Azazi’s deep-seated rage it appears was more of a moral issue, as he could no longer guarantee an improvement on security issues, and in his capacity as the security ear of the President and as a well-tested soldier any restrictions placed on the secrecy and security aspect of his job was in disappearance, as disclosing his inner emotional pains was all that matters to him.

Even if his full-blown anger stood out as endangering national security it matters not on that faithful day as the top political parties have already done the damage with total impunity and indifference.

Azazi knew fully well that his burning frustration since finding himself in the midst of do or die politicians would draw attention away from the pretense, silliness and denial which appear to be continuously shaping the nation’s polity.

He knew that to bring to discourse honest dialogue about our present times and how we got to this level of national confusion and undemocratic ways of existence it was worth the effort and time to open his mouth.

Azazi’s show of public resentment which he displayed to the who-is-who in political leadership came out as a form of political anger even though he is not a politician, and he made sure to blame his listening political audience as responsible for the sweeping societal insecurity. Which to him is a factor of their self-made rules like the system of zoning which he sees as antithetical to the Nigerian constitution.

Azazi as a man of humanity and art by virtue of his education and as a man styled with an apparent personality of systematically reaching and executing decisions, some persons in our society have taking his meticulous appearance and painstaking conduct to be that of indifference. Now they see how wrong they are.

That very Friday, during the second version of the South-South economic summit in Asaba, he knew that one side of the Nigerian political divide known as People's Democratic Party (PDP) would be fully represented and as a calculating soldier with well-planned and prepared notes, may be for days or weeks or even months, vented out his inner frustrations line by line, irrespective of whether the PDP power-that-be identified with his emotions—unconsciously or consciously. He may have even wished the President to be there to see a fellow kinsman telling it all!

In fact Azazi, would have done the same exact thing in the north-east of the country full of core members of Congress for Progressive Change (CPC) but with a different type of notes and preparedness.

Azazi by his nature and training in national and international principles of peacefulness, he sees the need for all humans irrespective of one’s place in the society, to follow the legal document called the Constitution.

As a long standing military student of national intelligence, national development, citizen involvement, strategic intensions, tactical coordination and international leadership he seems to approach governance and leadership through the apparatus of the Constitution imperfect as it may be.

For Azazi, anything short of true practice of the constitution or the rule of law could represent various lines and cycles of disorderliness, rebellion, double-dealing, intemperance, inequity, politicking, disunity and discomfort.

Azazi appears to be telling the political class across the nation unless they stop making their personalized rules or doctrines and take the pain to show greater respect for the rule of law in matters of elections, power sharing, and economy, the rising insecurity and civilian extremism may not submerge fully even with the best security infrastructures.

Azazi, by removing the wall of anger between him and his master—the PDP , he had in fact placed the political leaders in a sudden position from where they can see in full view the anger, worry, resentment, frustration, disappointment and other negative emotional states being felt in the north and in the south of the nation.

Azazi is making it clear to the political leadership that to continue to justify the principle of unconstitutional practice, leaves room for more undemocratic responses to their existence and that could include acts of insurgency and chaos in the society.

In using some of his embedded emotions and pains to repudiate the political leaders, beginning with the southern ones, he appears to be disclosing to the country very serious and powerful consequences in the upcoming rounds of political fight for the presidency and other similar positions.

Azazi as a man who is skilled in peaceful resolutions, national integration, meritorious leadership, and American diplomacy any attempt to ignore his true revelations, and even punish him will be a cause for him to further validate his deep feelings of anger, sadness, and frustration and in the process free himself from an interfering undemocratic politics which he sees as currently at play in lives of the people.

Consequently, whatever follows this undemocratic divide in leadership with its symptoms of burning distrust and greater danger occurring, Azazi who is currently in the midst of all this divide, appears to be creating healthy ways for his own personal freedom.

Azazi, as he fights inwardly and to some extent outwardly, in an attempt to rescue the nation and even if he is made to apologize for his honored words but under the cover of slip of tongue where the underlying truth really lies, he appears to have another painful concern for his kinsman , Dr. Goodluck Jonathan, who at this time and in the wake of all these happenings is heading a polarized society, and caught between the southern and northern political divide, as such may not be able to escape soon from the partisan burden of a worried nation like Nigeria.

Emotionally, he appears to be telling the President here is a quit notice, my anger is a call your resignation from the presidential leadership at this time!

If Azazi’s emotional exposé was to provoke more national crisis as in Jonathan’s resignation, sorry the President is still standing and the President should not resign.

The President must be wandering how could someone he trust dearly pour out his broken heart publicly, and resolve to pour out his wrath on him and the political leadership, a question that Azazi could fully answer personally in response to a psychological therapy session, that is if he deems it as helpful.

Nevertheless, Azazi in his spirit and mind appears to see the path of progress and unity through the eyes of the constitution but whether this fantasy will turn to a reality is what is probably burning within Gen. Andrew Owoye Azazi at this unpredictable time. On that unique day in Asaba, he must have hollered free at last, free at last!