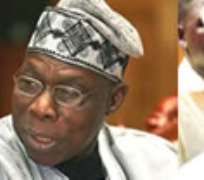 Obasanjo & Oni & Oyinlola
Is it safe to interpret former President Olusegun Obasanjo's resignation as chairman of the Peoples Democratic Party's (PDP) Board of Trustees (BoT) as retirement or semi retirement from active partisan politics? The old general cited the need to deploy his talent and experience to participating on the global stage as one of the reasons he decided to quit the position.

To the legion of party members in his South-west base, particularly in Oyo and Ogun states, this would be most welcome. For one, it signals that the party, particularly in the two states, where the former Nigerian leader's perceived meddlesomeness had stoked the embers of crisis and factionalisation, would witness a modicum of peace.

Although generally perceived as lacking grassroots followership, Obasanjo has often had his way due to the respect accorded him as an elder and as a former head of state as well as the influence he wields as godfather to President Goodluck Jonathan. This, political watchers note, has enabled him to force-feed the South-west PDP with his opinions and decisions, often at the detriment and displeasure of a large section of the party.

An instance of this was his role in the emergence of Tunji Olurin as the PDP governorship candidate of his native Ogun State, which led to the break-up of the party, inciting a splinter group loyal to the former governor of the state, Otunba Gbenga Daniel, to support the PPN candidate that eventually resulted in the election of Action Congress of Nigeria (ACN) Ibikunle Amosun. Not only did Olurin lose, all other PDP contestants for the National Assembly seats were defeated.

Also, lately, the Ota farmer-turned politician was surreptitiously involved in Oyo local politics, giving his backing to a faction of the party trying to wrest its control from the erstwhile governor Adebayo Alao-Akala.

Before that time, the old man had been involved in the frustration of all moves at reconciling feuding party chiefs opposed to Akala's second term bid, which eventually forced the likes of ex-governor Rashidi Ladoja, out of the party and others to work in protest, for the election of the ACN in the state.

A sign that there is a fresh breath in the air, is, perhaps, the gradual reunification between the Kashamu Buruji faction of the party in Ogun State and the Daniel camp as well as fusion of followers of another prominent leader, Jubril Martins Kuye, with the OGD group, leaving Obasanjo apparently ostracised. Also, in Oyo, the various factions are moving towards reconciliation, although the covert support he is giving the Taofeek Arapaja/Jumoke Akinjide group is stalling the effectiveness of the peace process.

Observers believe it could be safe guessed that the party would witness greater cohesion and return to its former winning ways, with Obasanjo's exit and the entry of former Ekiti State governor Segun Oni as national vice chairman (South-west) and his Osun State counterpart, Prince Olagunsoye Oyinlola, as the national secretary of the party.

The two men are seen as the answer to the ACN challenge and dominance of the region. Oni is seen as hawkish, with his record of blistering and trenchant attacks on the ACN and unrelenting campaign to upturn the verdict of the court, which sacked him and gave his governorship seat to ACN's Kayode Fayemi.

Oyinlola, on the other hand, pundits predict, would rise to become, perhaps the most powerful and rallying point of South-west PDP, not only by virtue of his new status as National Secretary but also because of his perceived cool-headedness and special ability to broker peace between sworn foes.

He was instrumental to bringing Obasanjo and his estranged deputy, vice president Atiku Abubakar, together after the duo left government in 2007 as bitter enemies. The Okuku-born prince also played key role in quelling the long hostilities between Ife and Modakeke communities when he was governor.

But, some observers are skeptical on the probability of the two officers, pulling the feat off. They point to the nature of the emergence of the two, which is suspected to be the outcome of the machinations of Obasanjo. Except the former president expressly retires from politics, these opinions warn that the men would be mere puppets, doing his bidding. In which case, the proverb that a leopard's offspring will always look like the leopard that never changes its spots ould have been proven.