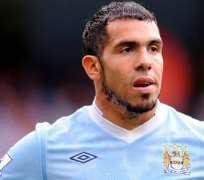 Argentina striker Carlos Tevez has told Manchester City he wants to stay at the club for the long term in a remarkable turnaround for a player who was an outcast only months ago.

Speaking ahead of Monday night's Manchester derby that will decide whether the Premier League title stays at United's Old Trafford or goes to City's Etihad Stadium, Tevez said he had repaired his relationship with manager Roberto Mancini.

"My relationship with the manager is totally fine, he's been as good as gold with me and there have been absolutely no problems," the former United player told Monday's Manchester Evening News.

"I'm an ambitious person. I want to work hard and win things with City."

Tevez said Abu Dhabi-owned City had big plans and he wanted to be part of them.

"This club has been building something special for the past few years. It was the project and the dream that made me come to City in the first place," he declared.

"I've been here since the start of that project and I share the same vision as (owner) Sheikh Mansour (bin Zayed Al Nahyan)," Tevez added.

"He has always been brilliant with me and I want to repay his faith and stay here as long as it takes to make the project a success."

Mancini and Tevez fell out in September after the manager said the player refused to warm up as a substitute for a Champions League match against Bayern Munich, with the Italian saying the Argentine would never play for the club again.

Tevez, who returned to Manchester in February after an unauthorised three-month absence in Argentina, reappeared in the starting line-up this month after apologising and being integrated back into the first-team squad.

City, who are three points adrift of league leaders United, have a superior goal difference and can go back to the top if they win at home on Monday.

Tevez goes into the game as the man who can make all the difference, according to his manager.

"I think Carlos is destined to score the most important goal in the history of this club," said Mancini.