Can Breaking Up Literally Break Our Hearts? 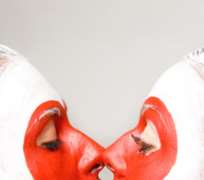 There's a pivotal moment in an episode of “The Simpsons” that has always stood out in my memory. When Lisa tells Ralph Wiggum she doesn't want to be his girlfriend, his face scrunches in agony and he clutches his heart as if it's literally breaking. I remember giggling at the exaggeration and then years later when my own heart got broken, I put my hand to my chest and felt his pain.

The word “heartbreak” is bandied about so much we often forget that, along with depression and loss of appetite, physical heart pain is an actual side effect of high-stress events like the loss of loved ones. The grief from a breakup or death can be so consuming that it's actually heart wrenching and can have serious consequences for our physical health, too.

The Physical Effects of a Broken Heart
Anyone who has experienced real heartbreak knows that it's not just a melodramatic term. The aching, tight feeling that accompanies such sadness is uncomfortable, but usually not disconcerting. However, for people with broken heart syndrome, it feels scarily similar to a heart attack—in fact, most people are diagnosed after being taken to the emergency room.

Broken heart syndrome, also known as stress cardiomyopathy, is a sudden weakness in the heart muscle due to a severely stressful situation. It has the same symptoms as a heart attack—difficulty breathing, chest pain, and a drop in blood pressure—but while a heart attack permanently damages the heart, broken heart syndrome's effects are temporary. Also, heart attacks are caused by blocked coronary arteries; people can experience stress cardiomyopathy without existing blockages. This important difference is often how doctors determine one from the other.

In 2005, researchers at John Hopkins University discovered the distinction when they studied the hearts of patients dealing with deaths of family members, car accidents, financial woes, and other anxiety triggers. They postulated that being under such stress causes the brain to release a constant stream of stress hormones like adrenaline into the blood, which makes heart vessels work too hard and reduces pumping strength. However, this is but one theory—doctors are still trying to determine exactly why adrenaline surges affect heart muscle cells the same way that heart attacks do.

The syndrome might be serious like a heart attack, but luckily it's a temporary condition that can be cleared up in about a week with proper medical care. Mostly people just need time to recover from whatever physical or emotional event shocked their systems enough to cause cardiomyopathy. Even seemingly innocent things like surprise parties and public speaking can spark heart problems; many patients don't have preexisting heart conditions, so it is difficult to tell who is at risk for the syndrome. For reasons still unknown, it does occur more frequently in women than men, particularly postmenopausal women.

Toxic Relationships Can Be Deadly, Too
Suffering through a traumatic event like a breakup isn't the only way to weaken our hearts—staying in a toxic relationship can be just as detrimental. It's no secret that negative relationships, whether platonic or romantic, can have negative effects on our physical well-being. Emotional stress puts added pressure on our bodies, which weakens our immune systems and increases depressive episodes. In 2007, a study conducted at University College London found that people in bad relationships—characterized by a lack of support and a constant source of stress—had a 34 percent higher chance of having heart problems in the future compared to those in positive couplings.

The study followed 8,000 subjects, initially heart disease free, over a twelve-year period. At the end of the study, 589 people had developed heart disease and those who previously reported relationship strife, especially the ones who felt that talking with their companions about problems made things even worse, had a higher occurrence of the disease. We've always known that fighting with loved ones is a sure source of heartache, and now we know it's a potential contributor to heart disease as well.

Our Loved Ones' Deaths Can Lead to Our Own
Grief over someone's death, particularly when it's someone as close as a mother or father, can be debilitating and excruciatingly painful. Depression and weight loss often stem from such loss, but now there's evidence suggesting that it can even result in death. A 2008 study led by Ivan Mendoza, MD found that in 102 reported cases of sudden death, thirteen of them happened on the anniversary of the day that their parents died. Out of this group, one third of them died around the same age that their parents did. But unlike broken heart syndrome, sudden death resulting from grief occurred more among men than women in this study and the majority of cases had underlying coronary heart disease.

This isn't the first time that grief and death have been linked. A psychiatrist named George L. Engel wrote a paper in 1971 detailing numerous cases of people who died soon after a loved one. We've all heard similar tales of people dying unexpectedly just a few weeks or months after their partners, as if they couldn't imagine going on without them. I once had an elderly neighbor whose wife died from cancer. Despite his advancing age, he was in great health and would rake the lawn every morning—that is, until she died. Then his morning chores became more sporadic and just a couple months later, he followed his wife.

We're inundated with the different habits we should adopt to keep our hearts in tip-top shape, like eating well and exercising, but getting out of bad relationships and dealing with loss in healthy ways aren't usually on those lists—even though they can potentially cause physiologic harm. Perhaps as more studies like these come out, people will realize just how important it is to strive for emotional as well as physical well-being. They're inextricably connected, even if more significance is put on one over the other. The effects of a breakup or death can be crippling and we should recognize that. Metaphorical heartbreak is painful enough as it is.