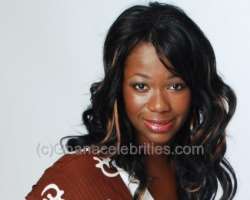 Born in Ghana but raised in Britain, Ama K. Abebrese is a TV presenter, actress and producer who have hosted a string of successful shows. Ama began her career at the Youth Culture Television in London, where she interviewed several celebrities including Hollywood legends actor Harrison Ford and director George Lucas.

She later landed other hosting duties; these include co-hosting the BBC2's youth show Pass da Mic and the English File educational series.

Ama's emits all the qualities of a bona fide presenter. Her vivacious and infectious sparkly personality transmit onscreen, this combined with her nonchalant delivery is just downright intoxicating. She is undeniably on the path of establishing herself as a star presenter in the UK television industry.

A regular fixture at red carpet events, Ama exudes confidence and ease of a professional when conducting interviews and has covered events such as the 'Screen Nation Film and Television Awards', the UK version of the Black Oscars, MOBO (Music of Black Origin) Awards where she interviewed celebrities such as Colin Salmon, Thandie Newton, Rihanna, Joe etc.

Ama is currently a presenter on the UK based satellite TV channel OBE TV which broadcast across UK, Ireland, Europe and North Africa, where she host and produce a series of shows including “one touch” and the hit chat show “On the Sofa.” Featured guest include international and African celebrities such as Akon, Micheal Essien, Becca, Jim Iyke, Idris Elba and the like. Her film credits include 2006 Ghanaian film London Get Problem.

With her thriving career and multiple ventures in media, Ama is definitely following in her idol's (Oprah) footsteps.