One Killed, 16 Hurt In Grenade Attack At Kenyan Church 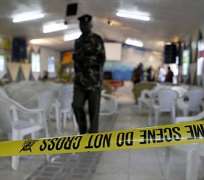 A gunman detonated a grenade in a Nairobi church on Sunday, killing one worshipper and wounding 16 in the latest in a series of attacks in Kenya since it sent troops into Somalia to crush Islamist militants blamed for cross-border raids.

Nairobi has said al Shabaab militants, who merged with al Qaeda earlier this year, are behind the surge in violence and kidnappings that has threatened tourism in east Africa's biggest economy and wider regional destabilization.

Police said the pastor of the church was concluding the service when a man who had "camouflaged" himself as a worshipper threw the grenade and then ran out into the street.

Some worshippers pursued the man who then drew what police said was a 9mm pistol and fired at pursuers before escaping in a maze of alleys in a busy market and residential area known as Ngara a few km (miles) away from downtown Nairobi.

"One person has been confirmed dead and sixteen others including the presiding pastor were injured. The motive of the attack has not yet been established," police spokesman Eric Kiraithe said in a statement.

A bloodied footstep marked the entrance of the God's House of Miracle Church, an edifice of corrugated iron sheets which police estimated could accommodate more than 200 people.

The pastor's glass stand was shattered and shards from the stand and stained-glass windows were strewn about the floor next to a mangled flower arrangement and overturned plastic chairs.

A male worshipper sobbed as he covered his face with a brown handkerchief, shaking his head at a request for an interview.

Worshippers carried the wounded to cars that rushed them to hospitals, and later huddled speaking in hushed tones as armed police ring-fenced the church to keep a curious crowd at bay.

"It just happened, we do not know actually how it started but we just heard a blast," said Hebo Hamala, a church elder.

The blast resembled two separate attacks at different bus stations and a bar in the capital that killed a total of 10 people and wounded many more last month and in October, a week after Kenyan troops swept into southern Somalia.

In late March, one person was killed when a grenade was tossed at an open-air Christian gathering near the port city of Mombasa, a major tourist destination.

Minutes later a grenade went off at a bar near Mombasa's main stadium but no casualties were reported.

Al Shabaab stopped short of claiming responsibility for the coastal attacks, but said in a statement at the time that Kenya's security depended on its military activities in Somalia.

There have been similar attacks near the border with Somalia since Kenya's military incursion.

Ethiopia has also dispatched forces into Somalia to support the anarchic country's shaky government, which barely holds the capital Mogadishu with the help of the African Union's force.

Somalia has been in shambles since warlords toppled dictator Mohamed Siad Barre in 1991. Fighting has killed more than 21,000 people since al Shabaab launched its insurgency in 2007, and possibly over one million in 20 years.

The rebels are fighting to topple the Mogadishu government and impose a harsh brand of sharia (Islamic law) on Somalia.