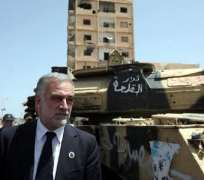 Recently Luis Moreno-Ocampo visited Misrata, Libya. Moreno-Ocampo is the chief prosecutor at the International Criminal Court (ICC). While talking with the local people the chief prosecutor told them of his intention to order investigations and possible prosecution of those who committed violent sex crimes in Misrata and around Libya during the Libyan dark days in 2011. For keen watchers of the activities of ICC the announcement was cheering, indeed. Check out the link to the news: http://www.modernghana.com/news/390513/1/icc-wants-to-tackle-taboo-topic-of-rape-i.html

The reason given for wanting to embark on such action by the authorities of the court is quite laudable too. The report said that there is allegation that the forces of slain leader Muammar Gaddafi used rape as a "weapon of war" against the Libyan civilian population. Herbert Ekwe-Ekwe is a world renowned scholar who has done an extensive work on the Biafra Genocide and other genocides in Africa and around the world. He has published numerous articles and papers on the subject and has a blog where he writes on the issue and other things at http://www.re-thinkingafrica.blogspot.com/. To him he considers Biafra’s Genocide as the “Foundational Genocide” in post-colonial Africa. What he means by that is that Biafra Genocide of 1966 to 1970 in which 3.1 million people died is actually the precursor of all the several genocides that have since taken place on the Continent. He further argues that most of the genocides that followed in Black Africa, including the 1994 Rwandan genocide where between 800,000 and 1,000,000 people were murdered, may have been prevented if the world community had had the moral courage and handled Biafra Genocide differently.

To many observers, the Misrata news gives all oppressed people the world over hope that crime never pays no matter the circumstance in which it is committed. Herbert Ekwe-Ekwe who received the announcement with much enthusiasm said; “this is a noble step by ICC but it is even more significant for the Igbo/Biafran people in the Southeast of Nigeria who have been subjected to several genocidal murders in the Nigerian state.” He observed that history has always had a way to repeat itself when the world chooses to be careless or negligent. In some cases he said the grimy part of history will come back at us, mocking our collective naivety by recycling even word for word a past that we negligently failed to handle with honesty and a sense of sincerity. He illustrated this by saying that the languages sound so similar and familiar that one would think that the two incidents are one and the same. He said; “In Biafra, Nigerian and British leaders then said that “Hunger is a legitimate weapon of war”. And today in 2011, nearly half a century after, the same language echoes, just a few hundreds of miles away in Libya, “Rape is a legitimate weapon of war”.”

If we must have a better world such laudable moves by responsible institutions of the world community are no doubt commendable and must be encouraged by all well-meaning people everywhere. For our world to become safer and just, especially for the weaker members, justice for all must not start and end in mere intentions but must actually be done on behalf of everyone in the world. And most important of all is that the application of justice and fairness must never be discriminatory. What we mean by that is that whatever that is considered a crime when committed in the Arab world, in Europe or America must also be considered a crime when committed in Biafra, Nigeria or any other part of Black Africa.

The International Criminal Court is a very respectable world institution just as it is the last hope for all people everywhere who may have been denied access to unbiased arbitration and justice everywhere else. Over the years the court has also established a reputation for itself and has always been known to do the right thing in all circumstances and by all peoples everywhere. It will therefore be presumptuous on the side of anyone to entertain any doubt on the court’s willingness to take up the Biafra Genocide case. At least the latest expression of intention by the court to deal with the alleged Libyan sex crime cases removes any more doubts. Besides it is logical enough to assume that just as heinous as the crime of sex is in Libya even so is the crime of genocides in Nigeria and they will be treated with equal urgency and seriousness that they both deserve. The world as a community, through the ICC must convince all people everywhere that it has the uttermost respect for womanhood by investigating, prosecuting and meting out the severest of punishments to the guilty in the Libyan rape incidents. In the same manner it is expected of the same world institution, ICC to have uttermost respect for the sanctity of human life in Nigeria and Biafra by investigating, prosecuting and punishing all the offending parties to the crime of so many genocides in Nigeria.

Back in 1966 starting from the month of May when the Biafra Genocide first broke it was horrific. But because of its suddenness it seemed to have taken the world by “surprise”. Before then the world had not witnessed such massacre of so many innocent civilians by fellow citizens and the authorities of their own state government. So, while the world as a community was still wondering on how to react to Biafra Genocide of 1966, the Biafra War broke out the following year and with the connivance of some world powers and, for three years the world witnessed the horrendous slaughtering of 3.1 million Igbo/Biafran people. That happened nearly 50 years ago. Since then the world can be said to have grown out of that shock through the years and has become wiser. Neverthless, during the period of Biafra Genocide which is considered as one of the darkest days in the history of the world when humans set out to exterminate a whole race of fellow human beings out of mere hatred, the world did not just watch but some parts of it, (the most powerful ones) actively joined in the murdering orgy. It was sad. And it is assumed that because the world community by its actions in Biafra seemed to have approved the crime of genocide so, as a result, several other genocides have continued to take place in Nigeria and many other African countries with impunity.

It is based on these prevalent impudent atrocities of the strong and powerful in Nigeria against Igbo/Biafran people and the rest of Black Africa that has continued to add credence and currency to Ekwe-Ekwe’s argument. Observing all the events and crimes against humanity taking place in Nigeria regularly against Igbo people it becomes quite easy to see why Ekwe-Ekwe and others consider the Biafran genocide as the most significant. Its place in history makes it so. For all subsequent cases of genocides on the Continent to be conclusive the “Foundational Genocide” must be revisited and exhaustively and honestly dealt with or there will continue to be the missing vital link. In legal parlance, murder has no statute of limitation in its prosecution. The Biafra Genocide of the 1966 to 1970 and subsequent genocides against the Igbo/Biafran people must be dealt with appropriately and it is only then would the world finally lay to rest the ghost of Biafra Genocide and those of others that it birthed.