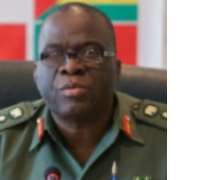 Huhuonline.com / can disclose that the National Security Adviser, Owoye Azazi, has come under serious attack by President Goodluck Jonathan and the Peoples Democratic Party (PDP) for linking the Boko Haram insurgency in the country to the unethical practices of

the PDP.
A visibly angry President Jonathan, who paid a visit to the site of Thursday's attack on THISDAY office in Abuja, after being conveyed round the building by THISDAY publisher, Nduka Obaigbena, to assess the impact of the destruction, called on Nigerians to ask Azazi how he came about his comment. He asked Nigerians to challenge Azazi to explain further what he meant by linking the activities of the party, which prides itself as the biggest in Africa, with the Boko Haram attacks.

President Jonathan said he had confirmed the NSA's statement from the newspapers, but added that he did not want to believe that the NSA really meant what he said at the South-south Economic Summit and stressed that, "I don't believe  it is the undemocratic practices of the PDP that gave rise to this or any other militant groups.

"...Sometimes, you have something in your mind you want to communicate but the way you communicate it, different people will give different interpretations."

The President blamed Azazi for not coordinating his words before uttering them and further blamed him for the manner he rubbished the ruling party, which the President said, was one of the most democratic parties in the world.

Also, the Peoples Democratic Party, in a statement released Saturday afternoon took a swipe at the NSA over his comment against the party in the wake of the explosion that rocked newspaper offices in Abuja and Kaduna.

The statement, made available to Huhuonline.com, said Azazi's comment was a very poor reflection of the foundation and the internal workings of the party as well as a wrong deduction on the roots of security challenges in the country.

The party which wrote through its National Publicity Secretary, Olisa Metuh, wondered why Azazi, who is an acclaimed security expert, would fail to know where and how the dreaded Boko Haram sect emanated. It warned him to stop blaming the party for the country's problems especially having to link insecurity with the PDP, which the statement called strongest party in Nigeria which is not owned by any ethnic group, person or group of persons.

"All our special National Conventions for the election of our presidential flag bearers since 1998 have seen candidates emerge on the strength of national unity, a common motif which envisages that every section of the country, majority or minority can aspire to the highest political office in our fatherland via a well-entrenched rotation and zoning principle in the constitution of our party."

The statement added that it remained resolute in support of the President in his bid to find a lasting solution to the many problems facing the country and advised Azazi to face the job for which he was appointed and leave the party alone.

Azazi, who was at the South-South Economic Summit in Asaba, Delta State, had linked the country's deepening security crisis in the north linked to the Boko Haram sect as a fallout of the lack of internal democracy in the ruling PDP.

Azazi said: "the extent of violence did not increase in Nigeria until when there was a declaration by the current president that he was going to contest.

"PDP got it wrong from the beginning, from the on-set by saying Mr A can rule, Mr A cannot rule ……according to PDP's convention, rules and regulation and not according to the constitution and that created the climate for what has manifest itself, this way.' He claimed that there was a level of politics in the problem which he described as "the politics of exclusion of the PDP in the region.

"Is it possible that somebody was thinking that only Mr. A could win, and that if he could not win, there would be problems in this society?'

"Let's examine all these issues to see whether the level of violence in the North East just escalated because Boko Haram suddenly became better trained, better equipped and better funded, or something else was responsible. It takes very long for somebody to be a sniper," Azazi had said.