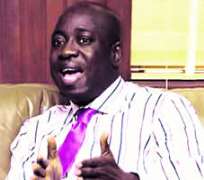 Abdullahi
Supervising Minister of Sports and Chairman National Sports Commission (NSC), Mallam Bolaji Abdullahi, has said that he once thought of tendering a resignation letter to President Gooluck Jonathan to quit the Sports Ministry following the large volume of crises he met on resumption to supervise the ministry.

'With what I saw when I resumed in the ministry, I almost felt like going to the President to beg him to remove me from the ministry. There were a lot of confusion and misunderstanding with one person or the other coming to tell me how bad the other person was,' the honourable minister started his keynote address during the one-day retreat organised by the National Sports Commission (NSC) for its parastatals and sports federations yesterday in Abuja.

Telling the story of his ugly experiences and thorny journey at the Commission, he rightly described as peculiar ministry, Mallam Abdullahi lamented that he met a near anarchy situation where rancour, mistrust, conspiracy had eclipsed the harmonious working relationship among the departments in the ministry.

He noted that he was equally not happy with the spate of violence at the stadium during league matches, the lamentable ranking of Nigerian referees among their counterparts in the world, adding that the situation has been allowed to degenerate to an intolerable level.

'There were too much confusion and misunderstanding when I resumed.