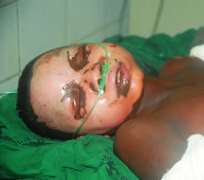 Barely one week after the United States warned of possible terror attacks in the country, Boko Haram yesterday hit ThisDay offices in Abuja and Kaduna, killing two securitymen and injuring some staff. The Sun office in Kaduna was also attacked. Three people died there

The attack on ThisDay office in Abuja occurred at 10:30am. The vibration from the explosion at the premises directly opposite the rowdy and busy Jabi Motorpark was felt as far as Kado, Mabushi and Wuse. The building collapsed as a result of the explosion.

Many residents were attracted to the scene, making it difficult for security and rescue agencies at the place to manage the crowd and evacuate the victims.

According to Mr Olusegun Adeniyi, Chairman, Editorial Board of THISDAY who was media aide to the late President Musa Yar'Adua, the management had earlier got a call from unknown people saying that the newspaper was writing rubbish against them and the management should be ready for them. Consequently, the management beefed up security at the entrance gate not knowing that the bombers would go through the rear.

The Group Executive Director, Mr Israel Iwegbu, told Daily Sun that the bomber was challenged at the rear gate when he tried to force himself into the premises. However, the bomber drove dangerously into the place where the vehicle exploded, killing the two securitymen and destroying the security gate and the printing press. About five support staff were also injured.

Mr Ismaila Kassim, a staff, who was transcribing an interview at the time of the explosion, told Daily Sun that he passed out momentarily when the bomb exploded, but he later regained consciousness. The FCT Police Commissioner, Mr Adenrele Shinaba, was not sure of the number of casualties, but noted that the primary assignment of the police in the place was to contain the crowd so that more people will not be injured. 'I will not be able to tell you the number of casualties now', he said.

He, however, dismissed the rumour that Leadership newspaper had equally been bombed, saying that it is a distraction.

Boko Haram had early this year threatened to attack three newspapers including Tribune and Vanguard.

Among the early sympathisers are the former FCT Minister, Mr. Nasir el-Rufai, who was petrified at the scene of the blast. He simply wished the souls of the dead to rest in peace. Also, the publisher of Compass Newspaper and former Governor of Ogun State, Otunba Gbenga Daniel, said that it does not make sense to attack a media house. He urged the perpetrators to stop for the sake of our children. 'Whatever it is we can sit down and talk about it', he pleaded.

The blast badly destroyed the security gate and the printing press while the adjoining buildings were also destroyed.

As the building collapsed, the two giant power generators in the premises were not spared as they were charred with husks of the burnt out machines still in situ. A highrise building with about seven floors just across the fence behind the generators was not badly affected as the glass window panels were smashed to the last floor.

Meanwhile, the Jabi Park and the adjoining streets had been cordoned off by the security agents including the police, soldiers, members of Nigerian Civil Defence Corps and of Federal Road Safety Commission (FRSC).

However, the injured were taken to hospitals in Abuja as police bomb detectives were still combing the area to ascertain the components of the bomb. Recall that Boko Haram had accused three newspapers of reporting falsehood.

Speaking through its spokesman, Abu Qaqa, the sect accused the media houses of taking side with the Federal Government.

He said the three media houses had ignored the ethics of journalism by indulging in what he described as 'opinionated reports and features on our group and its activities in the north, while we did not make such statements or claims while establishing the Sharia Legal System and the release of all our members as main conditions to dialogue with the Federal Government.'

Qaqa had said: 'We had warned four foreign electronic media houses last year, and now three newspapers in Abuja and Lagos had taken sides with government or security agencies or both.' He threatened that the sect would take measures against the identified print media houses.