Dating Don’ts: How Not To Deal With A Sick Boy 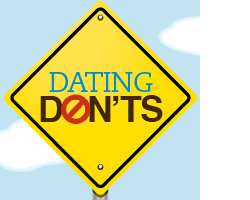 Devil get behind me, it's cold and flu season. Maybe it's because I grew up with a mom who refused to categorize any of her five kids as officially “sick” unless fluids were exploding and the temperature hit well into the hundreds, but I am not the person you want taking care of you when you're not feeling well. Conversely, when I'm under the weather, the first thing out of my boyfriend's mouth is always an offer to rub my chest down with alcohol just like his Greek mama used to do when he was a kid. No, thanks!

I've found there are two types of patients—the cranks and the crybabies. I'm more of a crank. I want glasses of cold water, complete silence for the duration, and whatever medications I'm taking within arm's reach. Don't talk to me if you don't want to get yelled at.

Once I've declined his rub-down offer—and yes, I always decline—he hovers, asking what he should do, what he should bring me, do I want some orange juice and am I sure I don't want that alcohol rub-down? (Yes, I'm certain.) It's very sweet, actually, even if his doting does quickly get on my nerves. (I said, silence!)

My man… well, he definitely falls more on the crybaby end of the spectrum when he's sicky-poo. And according to an unscientific survey I conducted—despite their rough and tumble reputations—most men are right there swaddled in the crib alongside him.

“Waah! Waah!” my friend Nell squealed, imitating her boyfriend the last time he came down with a cold. “A ginormous baby,” reported Claire, adding, “it's international, my brother and father in Ireland are the same.”

Crybabies demand constant attention, round-the-clock monitoring, lots of cooing, fretting and superhuman quantities of patience and nurturing. My buddy Pam is really good with this kind of thing. “To make him feel better, I keep the house stocked with his favorite juices and teas and order in his favorite spicy Thai soups. I put eucalyptus oil in the shower and rub his neck.”

Unfortunately, her boyfriend is the exception to the rule—the rare and exotic male crank. “He growls and is ungrateful at being taken care of and receiving things like juice and soup.” What a jerk, I think to myself, until I realize how much he sounds like me.

Compared to Pam with her eucalyptus oil and neck rubs, I'm like Nurse Ratched in “One Flew Over The Coo-Coo's Nest.” I will gladly dispense drugs, fetch beverages and hand over the remote, but I have a limited tolerance for whining. Nell agreed with me, “When he has a hangover, he refuses to drink water. When sick, refuses all medicine.,” she says of her man, “I can't stand people who will do nothing to help themselves but want to make everyone else around them miserable.”

Yes! That's what it is—the need to spread the misery! (Not to mention the cooties!) When animals get sick they go hide in a dark corner. Is it so wrong to expect the same from our men?