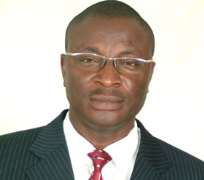 BY SIMON EBEGBULEM
CHief Solomon Edebiri is the gubernatorial candidate of the All Nigeria Peoples Party, ANPP in the forthcoming gubernatorial election in Edo State. His aspiration is being supported by a loose coalition of parties known as the Coalition of Progressive Political Parties (CPPP). He spoke in an interview on developments ahead of the July 14 election. Excerpts:

YOUR coalition recently adopted the ANPP as platform for your governorship election, how did you arrive at that?

The use of ANPP as platform for the coalition candidate was in fulfillment of the coalition's Memorandum of Association which saw my emergence as the consensus candidate of the coalition of Progressives Political Parties. The final decision to use the ANPP was after serious deliberations, democratic process of deciding of which of the nine political parties to use. We eventually zeroed in on CPC and ANPP and at the end of the day there was a consensus agreement for us to use the ANPP.

We are very intact. In every family there is usually a stubborn person. Yes I agreed that there are one or two persons in the system which is expected. But that is not to say that we are not together. You will recall that the CPC has been having an internal problem and of course because of the internal crisis that is why you observed what was happening. But Godwin Erhahon (CPC state chairman) still remains the chairman of the coalition that has not changed.

Solomon Edebiri
In the last press conference we held you will observe that Erhahon still believes in the cause of the coalition. And as long as the party continues to recognize Erhahon as the chairman, CPC is still with us in the coalition. We are all intact there is no crack in the coalition.

Do you consider Chief Odigie Oyegun's exit from the ANPP a setback for your bid?

Well this is an election that will be determined by the people. And as long as it is the people's desire to have Edebiri to come and industrialize this state, to come and revitalize this state, of course the people will move en-mass to support our cause. Oyegun's resignation from the party has no effect on the party. I respect him as an elder and I expected him to guide his people in the party to make history but he is supporting the ACN and of course the party has to take some decisions, to protect the integrity of the party and what the party believes in.

But does the ANPP have the structure to face the ACN and the PDP in the forthcoming election?

Structure is around human beings. It is the candidates that matters. ANPP has structures in the three senatorial districts and their structure is coming up stronger since I emerged as their candidate. But again people know my pedigree and of course other members of the coalition will certainly work with the ANPP to actualize our dream.

How will you compare the PDP performance and that of the current ACN led government in the state?

Of course we know that PDP's ten years in the state left nothing for us to remember. The party failed the people of the state so badly and that is why they are finished today. And it will be very difficult for the PDP to change and become a peoples' oriented party that will bring up programmes that will help the common man here in Edo state.

However, of course you know that the ACN under the leadership of Governor Oshiomhole has only been involved in a specific direction of development. They committed themselves to a few roads and what we are saying is that you do not waste the state resources on passable roads, you put the money on impassable roads.

But there is this strong rumour that you are actually working for the PDP and may dump your ambition to support the PDP candidate before the election?

False, false and absolutely false. I have no intention to dump my ambition; I have no intention to rescind my interest in this state for another party, no. We all have equal chances and as we go by the day in this campaign, I am beginning to see that we even have brighter chances than the other two candidates.

But what edge do you think you have above the ACN candidate, Comrade Adams Oshiomhole and the PDP's Gen. Charles Airhiavbere?

Of course my business exposure. If you look at all of us, I have been a business man for over twenty years. I have been in the private sector and I have successfully managed so many companies and today they are running well.