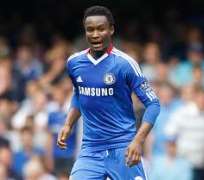 Mikel Obi has revealed that Chelsea's qualification to the UEFA Champions League final Tuesday night was a perfect 24th birthday gift for him. Ten-man Chelsea beat all the odds to draw 2-2 at Barcelona Tuesday and thus qualify 3-2 on aggregate for next month's Champions League final. .'I am very happy with this achievement, it was a great and perfect birthday present I got. I couldn't have asked for anything better.'

Mikel, who turned 24 on Sunday, also said he had a low-key celebration in London with friends very much mindful of the big game against Barcelona. The Nigerian midfielder said determination was the key that gave the team the ticket despite playing away in front of a partisan home crowd at the Nou Camp against the favourite and defending champion. 'We expected a tough game, which it was. We gave a good account of ourselves,' he said.

'We were determined to get the ticket and we fought the battle like warriors.

We played the game of our lives especially when JT (John Terry) was red carded and we knew we had to play for him. 'Determination was the key. I am looking forward to yet another great performance in the final.' This will be the Nigerian star's second Champions League final as he was also part of the Chelsea team who lost on penalties to English rival, Manchester United, in the 2008 final in Moscow.

He was an unused substitute in that memorable final, but everything now points to him starting this game on May 19 inside the Allianz Arena in Munich after two solid showings in the semi-finals against Barcelona.