WHAT TO EXPECT FROM LAMIDO 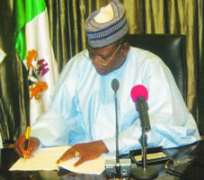 Sule Lamido
Five years in office, the dreams of Governor Sule Lamido of Jigawa State is gradually coming to fruition. Speaking to a select audience for the signing of the state's 2012 budget, Lamido noted that though this year's budget is bigger than last year's, the expectations of the people have also grown bigger.

In deed, the signing of the budget offered stakeholders and the general public a fresh opportunity to appraise the economic landmarks in the state and to make an objective stocktaking of the state's economic development in the out gone year.

What are the highpoints of the 2012 budget of Jigawa State? Who gets what and what is the likelihood that allocations of funds to different sectors would translate to the huge opportunities envisaged? Insights and answer to these questions must draw essentially from the governor's 2012 Appropriation Bill presentation to the State House of Assembly on December 30, 2011.

According to the governor, while the 2011 budget had a total size of N77.3 billion, N104.4 billion has been earmarked for 2012, representing an increase of 35 per cent. Lamido maintained that having set aside N2.44billion as stabilization fund, N101.96billion retained revenue would form the benchmark for the 2012 expenditure. Here, the recurrent expenditure, which consisted of personnel and overhead costs including Consolidated Revenue Fund Charges is pegged for N48.27billion, the equivalent of about 46 per cent of the total budget estimate, an increment of 19 per cent to the recurrent revenue for 2011. The governor revealed that N53.71 billion will be dedicated to the proposed capital development projects and programs of the government in the current year.

Interestingly, a general over view of the revenue/expenditure chart for the budget manifests an evident effort to align the entire estimates with 2012- 2014 Medium Term Sector Plans of the state government. Under this plan, the state government envisioned a socio-economic and reform platform that is home grown, but abreast with global challenges, apart from being consistent with the vision of the National Transformation Agenda of President Goodluck Jonathan.

The synergy between Medium Term Sector Plans and the budget is not lost. While the Medium term proposed nine key sectors of attention, the specific policy thrust of the budget not only reechoed these initiatives, but is committed to the same approach in realizing the overall objective.

To step up investment in the economic sub-sector, for instance, N27.2billion representing 51 percent of the capital development expenditure is set aside to tackle and ensure the implementation of the various programs and projects under the sector. This represents a huge increase compared to the expenditure of the previous year, which is explained by the additional momentum that would be targeted at the construction of roads and the development of the transport and commerce subsection in the state.

A further sketch of the nature of the budgetary activities in the economic subsection of the state showed that government is not relenting on the agricultural sector as agriculture is allocated N4.6 billion. This is to be deployed for the development of the various programs and projects in the state, including the loan financed project of JARDA. Key areas of government's attention include the procurement of agricultural imputs including fertilizer and high yield crop varieties, irrigation development, expansion of work bull development program, development of farm settlements and grazing reserves.

The development of Medium Scale Enterprises would include the relocation of mounting troops at the EPZ, the renovation of the EPZ motel, provison of clinic services. Other projects include the surface dressing of its road networks, drainages at Maigatari, Gujungu and Sara markets and the production designs for the modernization of additional four major markets at Shuwarin, Hadejia, Kumsa and Furji. Equally mentioned here is the Solid Mineral Development initiative of the government among others.

Government plans in 2012 to address the challenges poised by rural electrification in the state, especially having identified rural electricity as a critical factor in the emergent economic development of the state. Lamido held that N700millon is dedicated for the commencement of new rural electrification projects and the completion of existing ones. Among the towns to be affected are Jaudi in Dutse, Gigiya in Babura, Jajikoli in Buji Buntusu in Gwiwa, Kastinawa in Kazaure town among several others spread across the 27 local government councils of the state.

To the state government, road and transport development is the second critical infrastructural component in the State Comprehensive Development Framework. To the government, while it would open up the hinterlands, tarred and feeder roads also unlock the economic potentials of the state as a whole besides the multiplier effects in the promotion of the growth of commerce and the promotion of commerce and business.

The governor recalled that in the last four year his administration had spent over N56 billion to provide over 1,100 kilometers of high grade tarred roads spanning all over the nooks and crannies of the state. He held that in continuation of the same spirit, he is spending N21.4billion this year for the completion of seven on going roads and the commencement of six new road projects, construction of 12 feeder roads, township roads among others.

Alhaji Buba Bello, an indigene of the state, held that the 2012 budget is indeed ambitious and graceful, insisting that if the performance of the previous budgets in the state under the administration of Lamido is a benchmark, then there is nothing to fear and so much to expect. He maintained that the key areas of problems, such as infrastructural development, education and agriculture, trade and commerce have been tackled frontally by the governor.

He disclosed that the governor's composition in the economic front cannot be faulted as the positive changes engineered by his policies are all but self- evident in the state, adding that as time goes on, the problems of the state will be effectively dominanted.