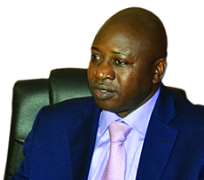 Omar Suleiman
The country's draft national transport policy shows that the Federal Government plans to establish an integrated transport system that will ensure effective connectivity between the ports, rail, road, inland waterways and air, thereby making use of the advantages of different modes to ensure seamless movement of goods. Managing Director of the Nigerian Ports Authority (NPA), Engineer Omar Suleiman, recently spoke on the efforts being made to develop the different transport modes.

Excerpts:
It is generally agreed that reduced turn-around time for vessels; reduced cargo dwell time, as well as security of ships at berth, cargoes at terminals and security of persons in the ports are major determinants of a good, efficient and user-friendly port.

Obviously, the desire to achieve these ideals informed the policy, which the Federal Government of Nigeria embarked upon in 2006.

The policy was to ensure that Nigerian ports were re-engineered to compete favourably with other ports of the world. The primary aim was to turn Nigerian Ports Authority into a brand name and a first- choice port in West and Central Africa and, indeed, in Africa. Apart from this rationale, Nigerian ports were also in need of huge resources for rehabilitation and modernization, to make them more efficient and to meet the demands of port users and also be a profitable venture.

The idea of restructuring the ports, which is also in tandem with the economic policy of the Nigerian government, is to grow an economy that is robust, private sector-driven, locally and globally competitive and efficient. The port reform programme was, therefore, designed to make them competitive, innovative and capable of attracting private sector investments. The basic tenet of this reform programme provides for public ownership of port infrastructure and transfer of cargo operational responsibilities to the private sector as a means of improving efficiency, attracting private funds and freeing public resources for social services.

Challenges of port concession
The Port concession has been judged as the most radical and successful economic reform in the history of Nigeria.

It threw open investment opportunities in the port sector with several experienced port operators both local and foreign taking up the management of port terminals and the Nigerian Ports Authority entering into partnerships with world class dredging companies for the channel dredging both capital and maintenance. It also in line with the concession agreement engaged in massive infrastructural developments in the Ports.

The challenge has been that these developments have resulted in increased patronage of the Nations, seaports with the cargo throughput increasing from 42million in 2006 to 82 million MT in 2011 this has put tremendous pressure on the only viable mode of transportation of goods which is the Roads.

Improvement initiatives
The Federal Government of Nigeria under President Goodluck Jonathan realising the importance of an effective intermodal system has made investment in the different modes of transport a top priority. The government is promoting stronger private sector involvement in search of solution. A major aspect of the transport system is the fulfilment of the presidential initiative project which is essentially geared towards linking all the six geo political zones on dual carriage way.

Also a lot of work has been done in the aviation sector as evidenced in absence of air accidents.

The Minister of Transport, Senator Idris Umar, gave an assurance that the Railway amendment bill that is presently before the National Assembly would be passed into law before the end of his tenure. According to him the prompt passage of the bill will open the rail transport sub sector for the participation of the private sector.

With the financial resources the Federal Government has so far invested in the rehabilitation of the railway together with the progress and success recorded which includes contract award of Lagos-Jebba track rehabilitation, daily arrival of heavy duty civil engineering equipment and immediate mobilisation to sites of the contractor, China Civil Engineering Construction Company (CCEC).

The Nigerian Ports Authority is committed to being the hub of West and Central Africa and every effort has been channelled to connecting the Ports to the Railways. This will permanently improve speedy clearance of cargo and free the burden on one mode of transport, roads he said. As an interim measure of freeing the roads pending the establishment of an integrated transport system and completion of major rail works that are in the pipeline, the Federal Government has in various occasions and each successive year set up committees to decongest the port. Currently a committee headed by Prof Syslvester Monye has done an amazing job by transferring overtime NIPP containers which has occupied the ports to Ikorodu.

The Management of the Nigerian Ports Authority (NPA) also in conjunction with the enlarged committee has flushed out all dilapidated and abandoned trucks along the Tin Can Island Port (TCIP), and other port access roads which hitherto were hampering smooth traffic. While these efforts yielded results in the interim a much more enduring solution is being sought because while cargo traffic is increasing in Nigerian Ports only road transportation is in existent, the bad roads not helping matters.

NPA/NRC Collaboration-Rail Network
Worried by the rampant cases of cargo congestion at the nation's seaports, NPA has made a case for the establishment of an intermodal connectivity to the rail lines and seaports. In collaboration with the Nigerian Railway Corporation, NPA has initiated rehabilitation and standardization of all rail networks within the major ports facilities with a view to enhancing speedy cargo delivery.

In order to re-establish an effective inter-modal transportation system in the port which is consistent with the Federal government's policy and the ongoing rehabilitation of the national rail lines, pre-qualification tenders were called and received in July 2009. This led to the invitation extended to eight companies to submit technical and financial bids. CCECC Nigeria Limited emerged the most responsive bidder and recommendation to award the contract to it at N860,657,797.23 has been endorsed by the Parastatals tenders Board and is to be forwarded to the Ministerial Tenders Board for consideration.

The contract has been awarded and rehabilitation works is 80 per cent completed.

Road network
The Nigerian Ports Authority recognizing the role of effective intermodalism also initiated several road projects within the port areas .These are efforts to ensure speedy delivery of cargo. Already remedial works for Tin can island service lane has been completed while the Rehabilitation of Access road to Kirikiri Phase 1 Apapa is ongoing. The rehabilitation of access roads to the Lilypond container terminal -remedial works on the existing carriageway and Rehabilitation of Port Harcourt Road are in progress.

Very recently after about six years of redtapism, the Nigerian Ports Authority (NPA) has finally commenced construction of the all-important 1.6 kilometre port access road at the Apapa. When completed, the road which is in the heart of Apapa Port  and which is to cost a whopping N3 billion, is expected to service all the terminal operators and other port users.

Leading top management team on an inspection of the project yesterday, Managing Director of the NPA, Engr. Omar Suleiman, explained that the project has been delayed as a result of misunderstanding of the port environment and real nature of the project by the Bureau of Public Fielding questions from journalists at the construction site in Lagos yesterday, Suleiman explained excitedly that; 'We have been on this project for the past six years, but now we are happy the project has started.'

These are additional efforts by the Nigerian Ports Authority to complement the numerous road projects being undertaken by the Federal Government in building a virile transport system.

Water transport.
The Nigerian Ports Authority through one of its concessionaires have commenced movement of cargoes through barges .This is also a welcome development and an evidence of efforts to improve interrmodalism in the Port Operations. At the recently concluded NIMAREX, Senator Idris announced the determination of the Federal Government to realize the potentials of the Inland Waterways .According to him the Capital Dredging of Lower River Niger has been completed while maintenance dredging is on-going. He went on to say that the Onitsha Port will be commissioned in the next quarter by Mr President.

With all these in place and the combined initiatives of the Nigerian Ports Authority this mode of transport will begin to witness patronage via cargo transfer and delivery.