I WON'T SPARE ANYBODY -JONATHAN 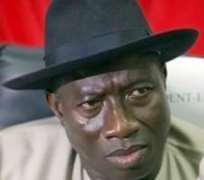 Jonathan
Reacting to cynicism over the implementation of the fuel subsidy probe report, the President said he won't spare anybody who is culpable in the scam.

President Goodluck Jonathan also said that he will not reach out or beg any lawmaker.

This is the fall-out of the debate on the subsidy report in the Senate yesterday.

The panel submitted its report last Wednesday, indicting scores of firms and ordering refund of over N1trillion to the Federal Government. Mixed reactions had trailed the report. Some believed that with the caliber of indicted individuals and groups, the President may not have the political will to implement the report to the letter.

Addressing newsmen yesterday, Senator Emodi dismissed insinuations that the Presidency is making overtures to lawmakers over the fuel subsidy probe.

She reiterated the President's commitment to zero corruption and vowed that he would give the oil sector a 'new breath of oil.' Emodi noted that Jonathan's commitment to transparent governance led to the appointment of former Economic and Financial Crimes Commission (EFCC) chairman, Mallam Nuhu Ribadu to head a task force. Said Emodi: 'For the fact that Mr. President had abinitio initiated the move to rid the industry of the rot because the bane of this society today is the maladministration in the petroleum sector is nothing, but corruption.

That he appointed Mallam Nuhu Ribadu to head another panel looking into the rot, is a clear manifestation that Mr. President is determined to rid the sector of the mess. 'So, he is not going to spare anybody. If not, why would he go and appoint Mallam Ribadu the ex-EFCC chairman, and his own rival in the 2011 elections?

'I am sure he is not going to spare anybody found wanting and there are no moves…I am the Special Adviser to the President on National Assembly Matters. Any slightest move here, of course, I will be the channel.'So, I am sure no move is being made and Mr. President has zero tolerance for corruption. Look at the people he selected, men and women of proven integrity. As this one is happening here, another investigative panel is taking place in the Executive arm. Mr. President is on the same page with National Assembly to rid the society of corruption.

'The Executive and the Legislative arms of government are on the same page on the issue and would collaborate towards ensuring that any rot in the sector is fully addressed.' Meanwhile, the President has nominated Inuwa Abdul-Kadir as a minister, to replace former Sports Minister, Alhaji Yusuf Suleiman, who resigned last year to contest the governorship primary of Sokoto State.